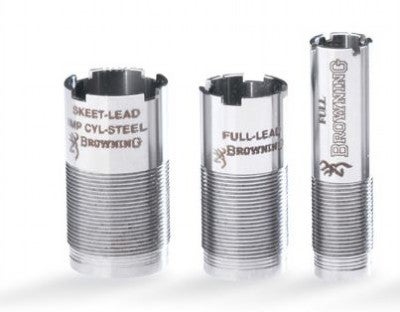 Invector / Standard Invector Choke Tubes. Browning was one of the original innovators in developing choke tubes designed to increase the versatility of a shotgunner's barrels. Now a hunter or shooter could easily change tubes (and the pattern) without changing barrels. The original Browning Invector choke tube system, often called Standard Invector, was extremely innovative for hunters and clay target shooters, allowing a fast, convenient and effective system for adjusting the pattern to the game/target and distance.

The Standard Invector choke tube system utilized barrels with internal threads to screw in choke tubes of the shooter's choice. A wrench was used to facilitate removal and installation of choke tubes. Popular choke constrictions were offered, including Extra Full Turkey and rifled for deer hunting, using Sabot, slugs or heavy buckshot. This was a game-changer for the industry. Today, nearly all shotguns have interchangeable choke tubes.

The original Standard Invector is currently found on Browning shotguns with threaded choke tubes in 10 gauge, 16 gauge, 28 gauge and .410 bore – primarily for Citori and BPS shotguns.