The Browning Invector-DS choke tube system is the biggest leap forward in design since interchangeable choke tubes were introduced. With the Invector-DS, we’ve taken the proven thin wall, muzzle thread choke concept to the next level of shot pattern performance. The exclusive brass alloy band at the base of the tube seals out gas and grit that sneaks between the barrel and tube, making the Invector-DS tubes easy to remove even after extensive shooting. Thin wall construction reduces the flare at the end of the barrel for a sleeker shotgun appearance. Lastly, the Invector-DS offers the most consistent, reliable tightening of any system ever. With all these features, you can’t lose with Invector-DS. The video below (filmed showing the A5 shotgun) explains key advantages.

The Shot Pattern You Want

When you thread in a choke tube, you expect it to give you the shot pattern you need for the shooting situation at hand. Invector-DS does this better than any of the competitions’ choke systems. From full to cylinder, the internal geometries of Invector-DS choke tubes have been tested again and again to ensure that patterns tighten consistently and reliably. With Invector-DS you get even shot spacing between chokes when it comes to pattern percentages, and the pattern you want when you take the shot.

Think of it as a scale of musical notes with a defined difference between each note as you move up the scale. Music with an inconsistent scale doesn't sound very good, and choke tubes with inconsistent performance scaling leave you not knowing if you are getting the pattern you want when you change chokes. The Invector-DS system corrects this forever. 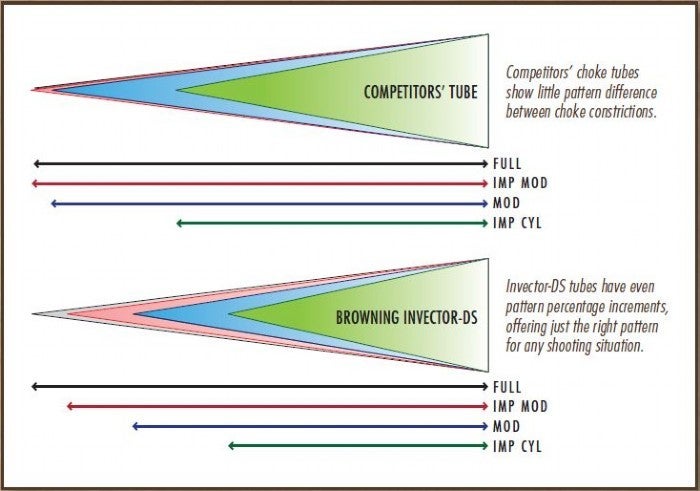 Although many firearms companies are hesitant to speak about the scaling of their tubes, Browning isn't. We test each choke at each constriction initially with target loads. Then the constrictions and resulting patterns are refined using a variety of loads. But there is simply no way a steel shot load will perform the exact same way as a lead shot load. And the scaling graph (or change in pattern from choke to choke) is never exactly the same when comparing different loads. But we do maintain a more consistent amount of change between patterns with different loads than with other choke systems.

Important: Browning Invector-DS choke tube designations are not based on the inside diameter as measured by a micrometer but by the actual pattern that is created by each choke.

The opposite way to look at it is to move the 30" circle approximately 15-16 feet closer to the shooter between each choke setting. This is what we try to do, and do it very consistently from choke tube to choke tube down the scale. Many competitor's tubes bunch up the scale at the tight end creating little change between a FULL, an IMPROVED MODIFIED and a MODIFIED choke, yet with a huge gap between the more open chokes. For this reason, you may not be able to use your experience with those kinds of chokes with the more precisely scaled Browning Invector-DS choke tubes.  Once you are accustomed to the precise scaling of Browning Invector-DS tubes you will get the target-hitting advantages of knowing exactly the pattern you are shooting each time when moving from near to far targets, and everything in between. 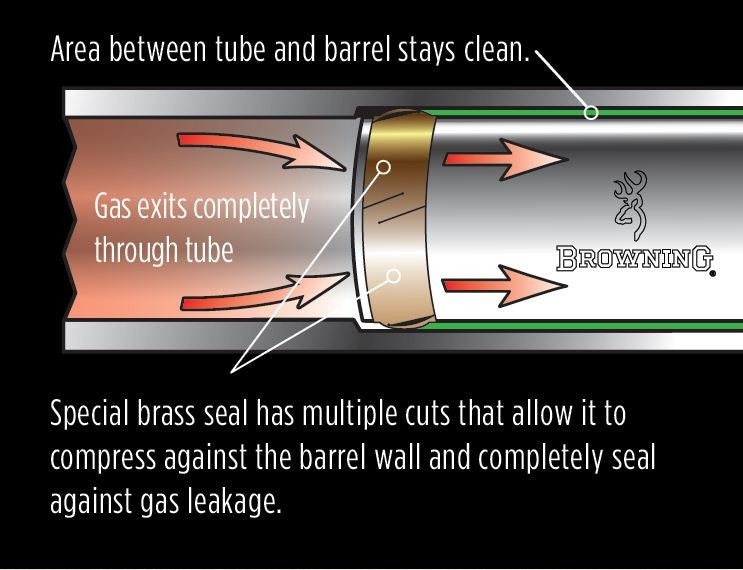 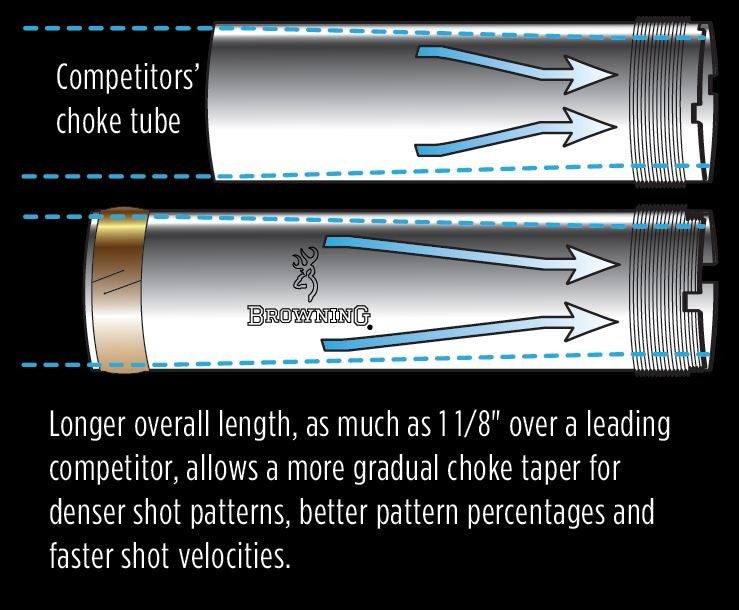