The advantages of a lengthened forcing cone are many. The forcing cone is the tapered transition between the chamber and the bore that constricts the shot column. The longer the forcing cone is, the more gradual the constriction. A gradual constriction reduces stress on the shot column as it passes into the bore, resulting in fewer deformed pellets. Less pellet deformation produces more uniform patterns and keeps more pellets in the central part of the pattern. Vector Pro is better than the competitors’ forcing cone designs because of the more gradual constriction. Lengthening forcing cones is a popular and expensive aftermarket practice done to increase shot pattern performance. But it comes standard on A5, Maxus, BT-99 and on 12 and 20 gauge Citori and Cynergy models. (Not found on 10 ga., 16 ga. 28 ga. and .410 bore shotguns as well as any Browning Silver shotguns.) 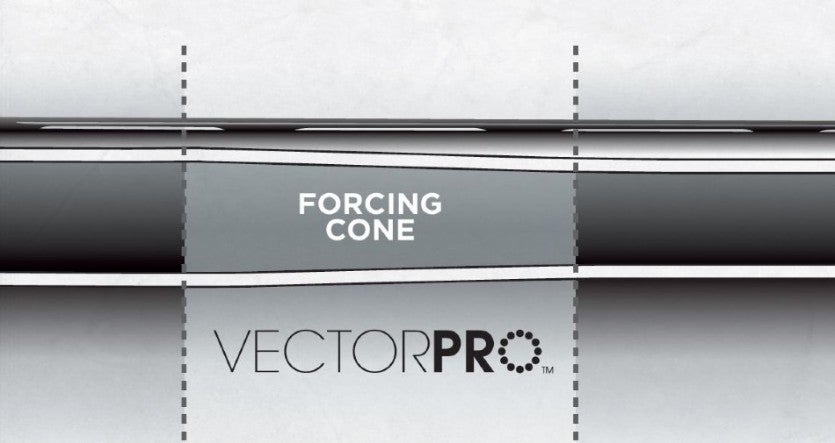 Browning was the first manufacturer to recognize the advantages of a back-bored barrel. With select shotguns Browning has gone a step further with Vector Pro, featuring a longer forcing cone than found on other systems. This long, gradual taper minimizes shot deformation and maximizes pattern uniformity, consistency and density. Back-boring increases bore diameter to its maximum specification, reducing friction between the shot cup and the barrel to propel the shot pellets to a higher velocity and reduce felt recoil by the shooter.

Reducing constriction from the forcing cone on the shot column results in fewer deformed pellets for more uniform patterns, and keeps more pellets in the central part of the pattern where they need to be to bag birds and targets. Browning’s back-bore specifications represent the ideal bore diameter. A larger bore diameter can let gases slip by the shot cup, resulting in both reduced pellet velocity and blown patterns. A smaller bore diameter means the forcing cone can deform pellets, leading to poor ballistic performance and uneven, spotty pellet coverage on the target.  The Vector Pro system provides a solution that is just right.