Realtree™ is one of the foremost designers of versatile hunting camouflage patterns.  Based in Columbus, Georgia, founder Bill Jordan, has been producing unique camo patterns since 1986.  We are a licensee of multiple Realtree™ patterns, providing exceptional concealment in a wide variety of terrains and environments. 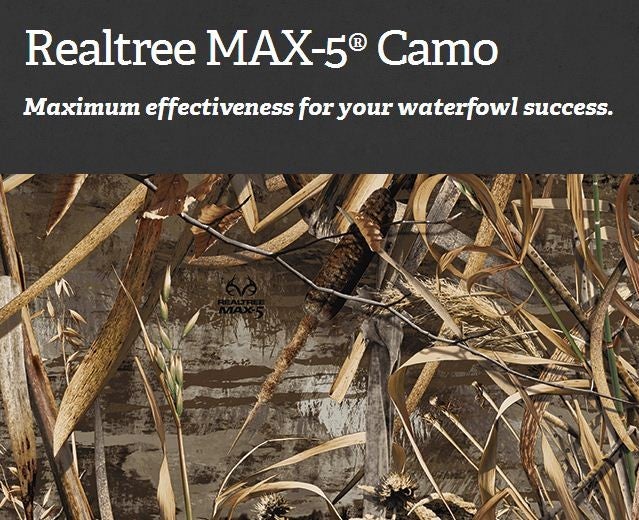 Company history from the folks at Realtree.

Bill had entered the hunting industry in 1983, when he started Spartan Archery Products in a back room of his father's boat dealership in Columbus, Georgia. Spartan manufactured t-shirts at a local mill, which were sold to a variety of large retail customers across the country. But the commodity garment trade was a tough, low-profit-margin business that depended on high volume—not easy for an established company and nearly impossible for a startup. Bill was pinching pennies and fishing bass tournaments on the side to create income. Meanwhile, he was constantly searching for ways to separate his company from the crowd.

And that is how Bill came to be sitting in his parents' front yard one day in 1986, with paper and colored pencils, sketching and coloring the bark of a giant oak tree that grew there. Bill believed that by layering the images of twigs and leaves over a vertical bark background, he could create a three-dimensional appearance that would match a variety of terrain—and make his pattern distinct.

Using local mills, Bill navigated the printing process until he finally had a set of camouflage clothing to photograph.

Always the promoter, Bill began to photograph the garments on bowhunters in tree stands. Every month for about eight months, he sent the images to hunting clothing buyers across the nation.

But Bill couldn't send sample garments, because the camo was doing too good a job disappearing. "We couldn't get the pattern to stay on the pants," he remembers. "It rubbed off. I had only one suit and no additional fabric, so I kept sending photos." When December rolled around, the buyers were clamoring for garments.

"I didn't have any garments," Bill recalls. "But I couldn’t tell them that, so I just sent them some more photos."

The problem would be resolved, but with no time to spare. Bill had begun working with Eastbank Textiles, and they met the printing challenge just one week before the Shooting, Hunting, Outdoor Trade (SHOT) Show. At last, Bill was on his way home with about 30 yards of the printed fabric to be made into garments for the show. But the airline sent the box of fabric to Columbus, Ohio, instead of Columbus, Georgia.

"I finally got the fabric on Monday, and the show started that Thursday," says Bill. "I rushed it to the manufacturer and they made the basic garments by Wednesday morning. I had naked mannequins waiting at the SHOT Show, and I was sitting in Columbus waiting to get pants sewn."

That afternoon, Bill flew out for the SHOT Show.