Point of Impact (POI) is an issue with all types of firearms and relates to the relationship between where you are aiming (or sighting) and the place where the bullet (or shot) is actually hitting down range.

This primarily refers to the process of sighting in your rifle.  POI with a rifle is making sure you understand the relationship between the place you are aiming (whether with open sights, a scope or other optic) and the place where the bullet is going to hit. The distances you shoot at come into play, as do the optics. You will want to refer to your optics instructions for sighting in your rifle or scoped shotgun.

Browning rifles, pistols and shotguns supplied with open sights are designed and shipped with the sights in the middle position. These settings are tested and proven to be accurate, though it must be noted that not all loads shoot to the same point of impact.

2. Shotguns with ribs, beads and sights

The following information primarily details shotgun POI when a bead is involved. The chart below deals with Point of Impact for shotguns. Point of Impact (POI) is defined loosely as the relationship between the center of a shotgun pattern and a correct point of aim on the shotgun. Point of Impact and Point of Aim are closely related. You must use the correct Point of Aim to determine the POI of your shotgun.

The correct point of aim reference for shotguns can be different depending on your shotgun, your bead alignment/type or the type of shooting you are doing. For example:

Shooters prefer sometimes desire different POIs for different situations, so our shotguns may have been calibrated by gun design engineers (prior to being manufactured) according to the end use of the gun. Generally our guns are made to be measured either: 1) from the Figure 8 for trap guns or 2) the top of the front bead for hunting guns. When testing, the shooter shoots at a dot or cross pattern on the center of the paper. The POI percentage is the percent of shot that falls above the dot and below the dot . . . always adding up to 100%. A 50/50 pattern -- with half above and half below -- would be common for many of our hunting guns.

The chart should give you a good idea of how it is calculated and how you can confirm your POI on your shotgun. Detailed instructions are below the chart. You will need:

This excellent chart was created by one of our gun experts working at our Arnold, Missouri, service facility. The testing procedure is outlined below the chart. 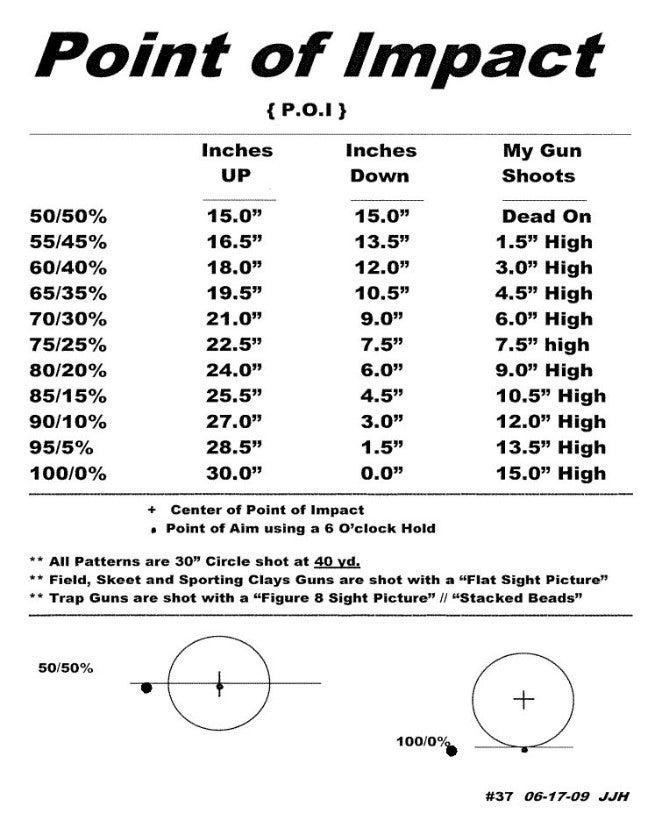 With our shotguns all POI testing is done in our test tunnels at 40 yards. The only exception to the 40 yard test would be the .410.  By industry standard the .410 is tested at 25 yards. All guns are shot from a shooting bench using a front and rear rest much the same as what a bench rest shooter would use. A sheet of paper approximately 5’ square is used with a center aiming point of 6 inches.

The shooter will use the sight picture appropriate for the type of shotgun being tested. A flat sight picture is used for Field, Skeet and Sporting Clays and a Figure 8 or stacked bead picture for Trap Guns. In all cases a 6 o’clock front sight hold on the target is used. 6 o’clock hold means sight bead held at the 6 o’clock position on the aim point.

The target is shot 3 times, the same as one would do to shoot a 3 shot group with a rifle. The purpose of the 3 shots is to give a denser pattern to work with. After 3 shots the pattern paper is recovered and a template 30 inches in diameter with a center hole is placed on the pattern and moved around to cover the most shot and the center marked. Removing the template, the shooter will measure from the center of the pattern to the center of the aiming pint; up, down, right or left.

With these measurements one can determine where the center of the pattern is in relationship to the aiming point.