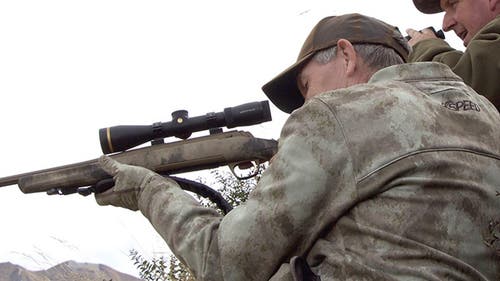 The X-Bolt Hell’s Canyon Speed rifle is good-looking, light to carry and offers pinpoint accuracy both in the field or off the bench. (NRA photo)

Few publications in the outdoor world carry the influence of the NRA’s American Hunter. As one of the official NRA membership journals, the print and online editions of AH reach millions of avid hunters every month.

In the online version of the magazine, editor John Zent went into great depth on the thinking behind Browning’s Hell’s canyon X-Bolt rifle lineup and how these great products can make your next hunt more comfortable and productive.

“(Hell’s Canyon Speed is for) hunters keen for hot technology in a style that fits their go-all-out mindset.”

“Over the past year, Browning has been building a new sub-brand designed for ‘Buckmark Nation’ hunters keen for hot technology in a style that fits their go-all-out mindset,” Zent said. “Hell’s Canyon Speed (HCS) matches the smarts, intensity and work ethic that spread from extreme high-country pursuits to hunting camps across America. Inspired by adrenalin-fueled mornings and long, hard, satisfying treks back to camp, the HCS collection encompasses four different product categories and rates serious consideration wherever hunters seek epic encounters with game.”

Kicking off the Hell’s Canyon Speed line is a new rifle model. “Based on Browning’s flagship bolt-action, the X-Bolt Hell’s Canyon Speed is an award-winning update loaded with accuracy upgrades,” Zent notes “The action is glass-bedded fore and aft; the fluted barrel is free-floated and comes equipped with a recoil-taming muzzle brake (which can be easily swapped out with a thread protector). Also present is the X-Bolt’s adjustable Feather Trigger, a 60° bolt lift makes reloading quick and easy, and a detachable rotary magazine that can be swapped out for a spare in seconds. Decked out in HCS’s A-TACS AU camo, the stock boasts a springy Inflex recoil pad and textured grip panels.” 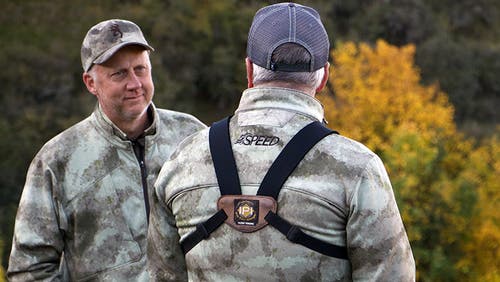 Browning Hell’s Canyon Speed clothing is designed to fit well and function flawlessly under the most active and demanding hunting conditions. NRA photo.

“…I’ve found that superb grouping off the bench translates to surprising field accuracy from such a light, packable gun.”

“While range-testing and hunting HSC rifles in .30-06, I’ve found that superb grouping off the bench translates to surprising field accuracy from such a light, packable gun,” reveals Zent. “Yet another touch that adds both durability and eye appeal is the Cerakote Burnt Bronze metal finish. This tough, non-reflective coat is favored by military operators for the way it takes hard knocks and yet thwarts corrosion. And that’s not just the barreled action, but also the bolt body and bottom metal—which really is metal. Paired with the sand/flat earth-toned stock, the X-Bolt HCS boasts the hottest contemporary look of any production bolt rifle.”

“…The X-Bolt HCS boasts the hottest contemporary look of any production bolt rifle.”

But having a hot-looking rifle is just part of the Hell’s Canyon Speed equation. Browning has created a full line of active hunting clothing and accessories that carry the HCS theme. If you are a serious, athletically-inclined hunter who hunts hard under difficult conditions and keeps hunting in wild weather extremes, then you need top tier hunting clothing. Browning Speed excels at every level and every situation—from the form and fit, right down to the smallest details like reinforcing and fasteners.

“I’ve worn Hell’s Canyon Speed clothing in foothills and mountain terrain in pursuit of big game and in lowlands calling turkeys, and even after several hard days, the stuff looks brand new,” Zent noted with enthusiasm. “The basic pants, shirts and undergarments are made from supersmart, high-tech wicking fabrics that somehow keep you comfy in summery temperatures, then warm when it cools down. But Browning can turn up the furnace, too, with a PrimaLoft-insulated coat that blocks out winter chill and yet weighs very little. Also, A-TACS camo blends in like it grew there, AU on plains or western mountains or FG in eastern and southern fields and woodlots—two highly concealable options.” 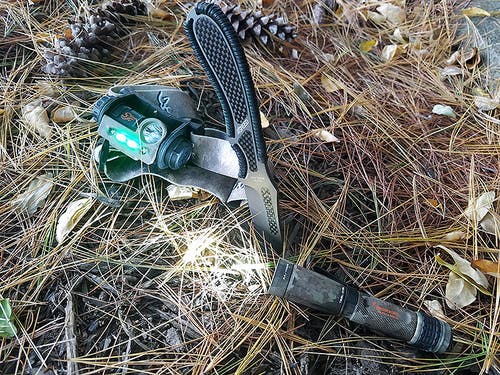 Take your choice, flashlight or headlamp, or take both… HCS lights are scaled for action. NRA Photo

Don’t forget that the little things like knives and lights can make or break a challenging hunting trip.

“The Speed knife is uniquely streamlined” shares Zent. “Machined from a single slab of ATS-34 stainless steel, its skeletal design slashes bulk but not strength thanks to carbon fiber inserts and paracord wrapping on the handle.”

“Take your choice, flashlight or headlamp,” concludes Zent. “Or take both, since HCS lights are scaled for action….The little fellow’s brightness will surprise, but the green is enough to get you off the mountain without compromising night vision. The Epic 3V Headlamp is …quite versatile…Like the flashlight, this little bugger is built to last.”

If you’d like to read the entire John Zent article please visit https://www.americanhunter.org/articles/2016/11/3/browning-hell-s-canyon-speed-when-your-style-of-hunting-is-fast-and-smart/