A bases and rings "How To" guide.

A FEW POINTERS ON HOW TO CHOOSE THE RIGHT BASES AND RINGS FOR YOUR SCOPE AND RIFLE. 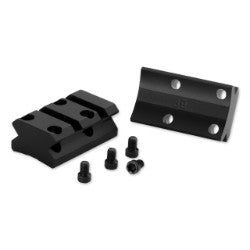 Choose the correct bases that fit your rifle or shotgun. 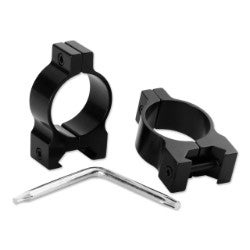 Rings must be made to fit the design of the bases you chose. Now that you have chosen a base style . . . 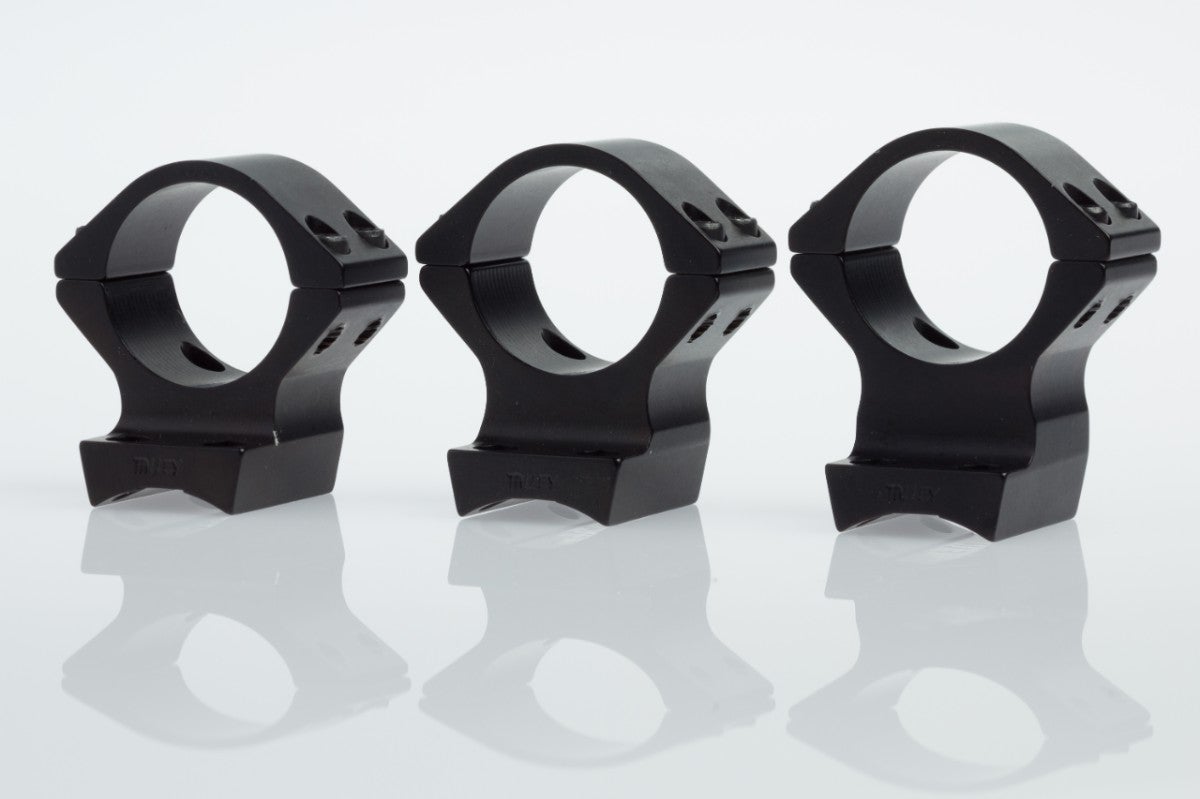 Barrel contour is a major factor in new rifle purchasers having difficulty determining the correct ring height. If you have any question about fit with a larger barrel diameter, step up a size in ring height. For example, if you have a heavier than standard barrel contour and are using a scope with a 44mm objective, just select Intermediate rings. That simple. If you are using a canted/sloped rail step up one size. If you are still unsure, call us during business hours at 1-800-333-3288.

Which height is right?

Guidelines on choosing the right bases and rings.

The right rings. One of the most common questions asked to our customer service department is "how do I determine which bases, rings, and rails are appropriate for my rifle?" This also applies to scoped shotguns, in some cases. The answer is often difficult and a bit complex for several reasons.

The solution: Rings are sold with different heights to accommodate the objective of the scope. You will not have a problem if you use the correct ring height for your scope. To do this, refer to the guide on this page for making your choice.

It is up to you which type or style to use: separate bases and rings, integrated bases and rings or rings that attach to a single rail or two-piece rail. The important thing is to build a scope mounting system that provides the best accuracy and performance overall. It is possible to damage a scope with the wrong setup. So be careful as you put yours together.  THE SCOPE OBJECTIVE SHOULD NEVER TOUCH THE BARREL WHEN MOUNTED ON YOUR RIFLE.

IMPORTANT: There are a great number of variables when attaching scope bases and rings and attaching a scope. These guidelines on this page should be considered as a starting point as you learn what combination of bases, rings, and scope are best for your rifle. Go slow. Don't damage your rifle or scope. If you need assistance call us at 1-800-333-3288 during business hours, 8:00 AM to 4:30 PM Mountain Time.

Why use a rail for mounting your scope?

X-Bolt with 20 MOA rail. The clearance between the scope objective and barrel is excellent.

There are two main reasons for using a rail.
1) Ease of mounting using the Picatinny Rail system and appropriate rings.
2) Sloping the base (usually by 20 MOA) to allow for shooting effectively when dialing in with an MOA type scope at extreme ranges.

Choosing a rail. It is EXTREMELY important that you order the correct length of rail for your Browning rifle. Rails generally come in four lengths.

You generally can choose from two types:

What is a 20 MOA rail?  A rail is a one-piece base that when attached to your receiver is angling down toward the barrel's bore centerline. The most common slopes at 20 Minutes of Angle. That is approximately .33 degrees. What is the benefit of an angled rail?

If you don't have a scope made for dialing in longer ranges and if you don't usually shoot beyond 500 or 600 yards, you don't really need a slanted rail.

20 MOA is not a lot, but it can move a tight scope objective too close to the barrel, causing it to touch. To be safe, order the next higher rings when using a 20 MOA rail, especially with a target or semi-target barrel.

Importantly, if you are using a scope with a ballistic compensating reticle, you probably don't need or want a 20MOA rail.

There are a few easy things to always do when attaching a rail to your Browning rifle: 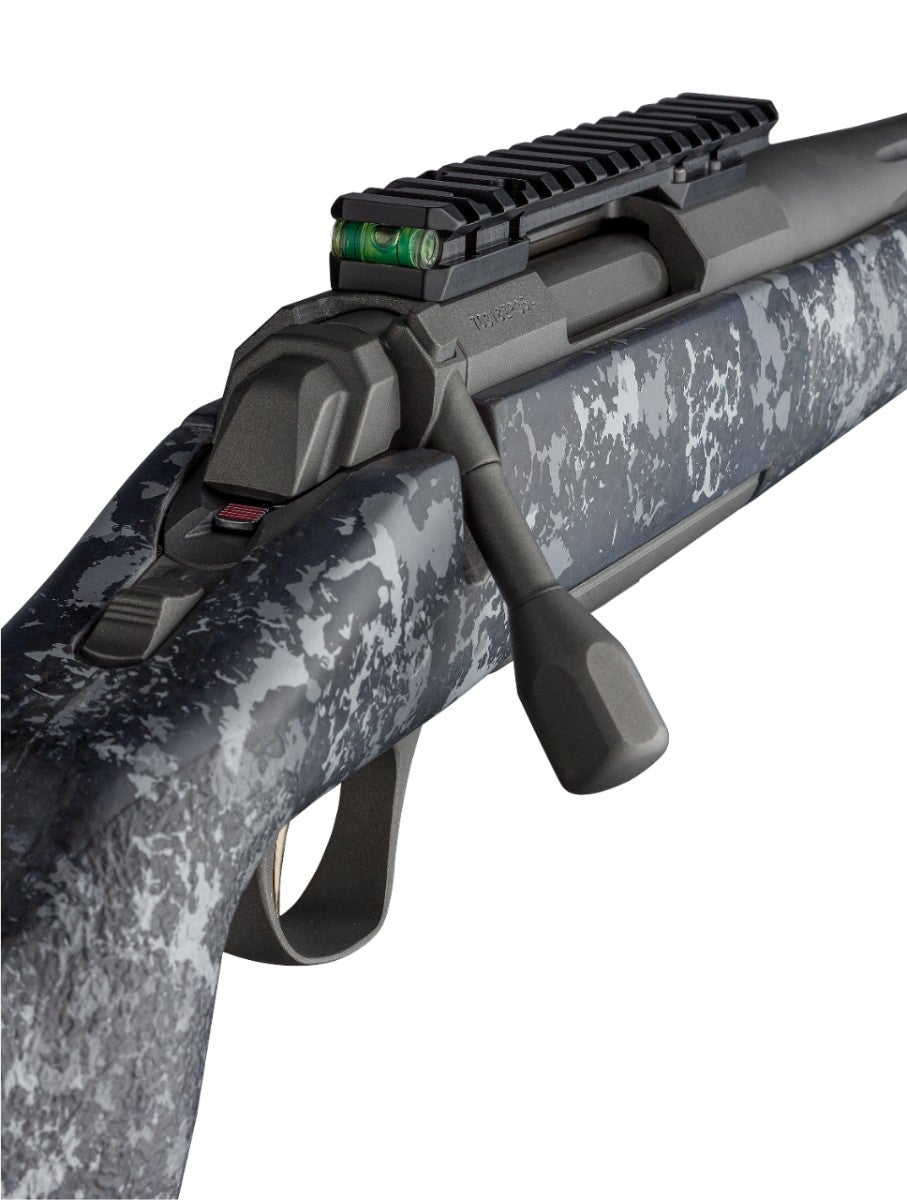 TORQUING THE SCREWS. For X-Bolt rifles, the torque specification for attaching a rail should not exceed 18-inch-pounds.

IMPORTANT: Inch pounds are not to be confused with foot pounds. 12 inch-pounds is the equivalent of one foot-pound. It is advisable to use a quality inch-pound torque wrench when torquing rail screws. Never over-tighten. 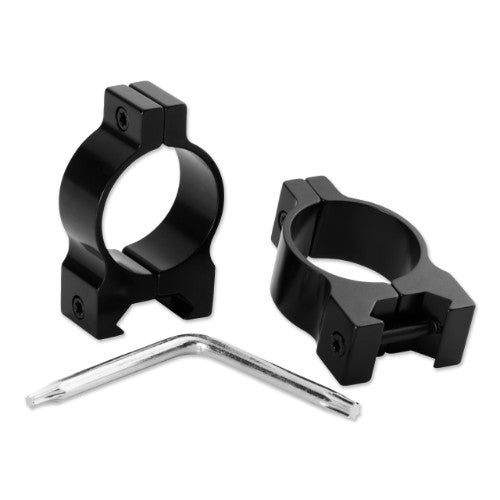 More on torque and other worries.

IMPORTANT: NEVER OVER TIGHTEN ANY BASE OR RING SCREW. ALWAYS MAKE SURE SCREWS ARE OF THE CORRECT LENGTH FOR SECURE ATTACHMENT. NEVER ATTACH A SCOPE IF THE OBJECTIVE TOUCHES THE BARREL. ALWAYS FOLLOW THE INSTRUCTIONS PROVIDED WITH YOUR SCOPE. YOU ARE RESPONSIBLE FOR YOUR OWN GUNSMITHING PRACTICES. IF YOU HAVE ANY QUESTIONS, CALL US AT 1-800-333-3288 DURING BUSINESS HOURS, 8:00 AM TO 4:30 PM MOUNTAIN TIME.