BROWNING, A-TACS CAMOUFLAGE AND THE SCIENCE OF CONCEALMENT.

It starts with a collection of colors taken straight from the outdoors and photographed in carefully controlled lighting. A mathematical algorithm takes the colors and writes “organically-shaped” pixels using the specific color information. The resulting pattern, while still digital is far more organic in appearance than other digital patterns because A-TACS Camo replaces the unnatural angled pixels with organic pixels. The organic pixels are then digitally modified to create real world elements without subscribing to the traditional “limb and leaf” mimicking patterns. The end results are patterns that eliminate the human outline from as close as a few feet and minimizing the “blobbing” effect when viewed from a distance.

Just as nature varies, A-TACS Camo doesn’t take a “one-pattern-fits-all” approach. A-TACS camouflage patterns were created to perform in climatic zones containing either arid or timber climates. The arid pattern (AU) is mostly brown with small samplings of green. For temperate, forested climates where green colors dominate, FG (Foliage/Green) is the best choice. These patterns are different not only in color but also in their design. In other words, they are not the same pattern in different colors, to do so would minimize effectiveness.

We are confident that once you wear A-TACS Camo patterns in the field, you will be a believer in their effectiveness and performance in getting you closer to whatever game you are pursuing.

Put A-TACS Camo and Hell’s Canyon Speed to the test. 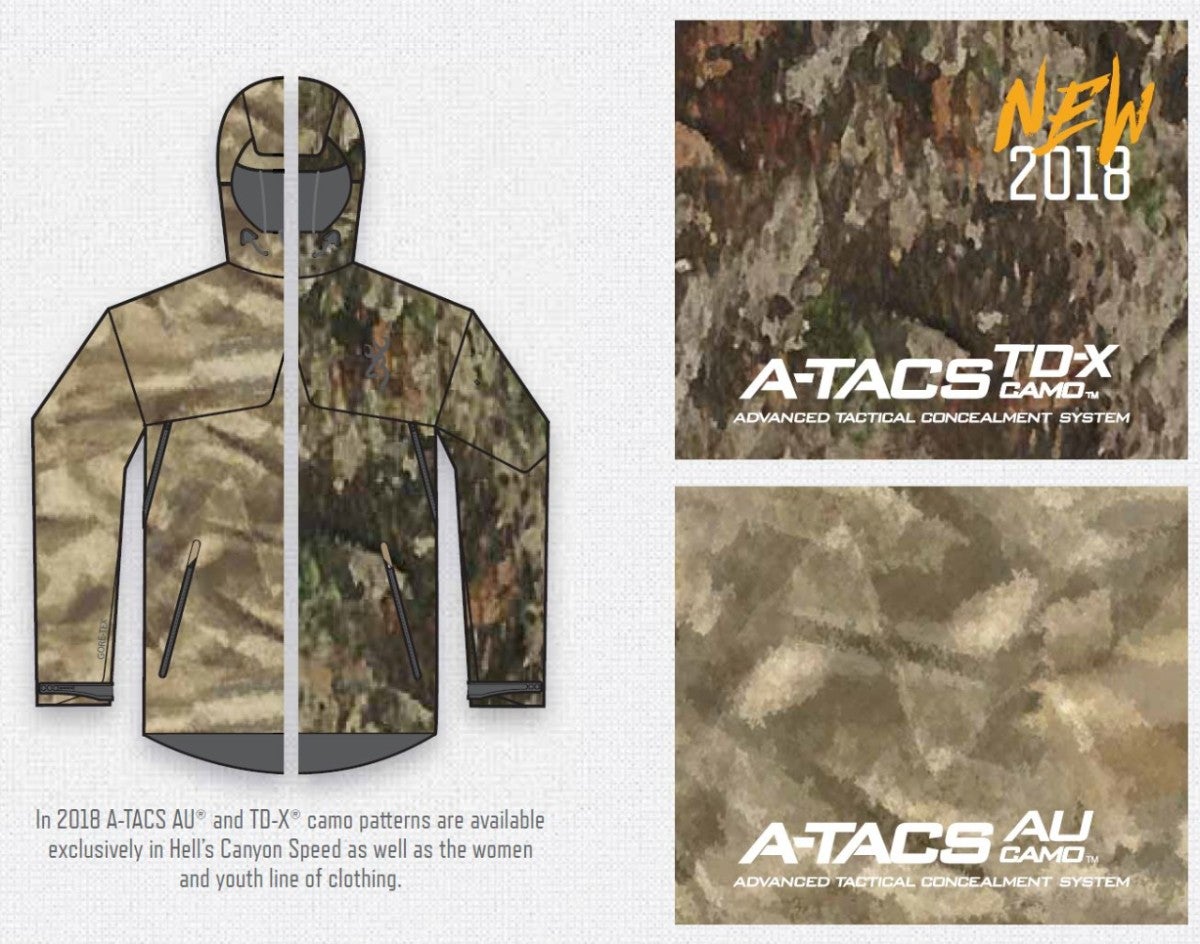 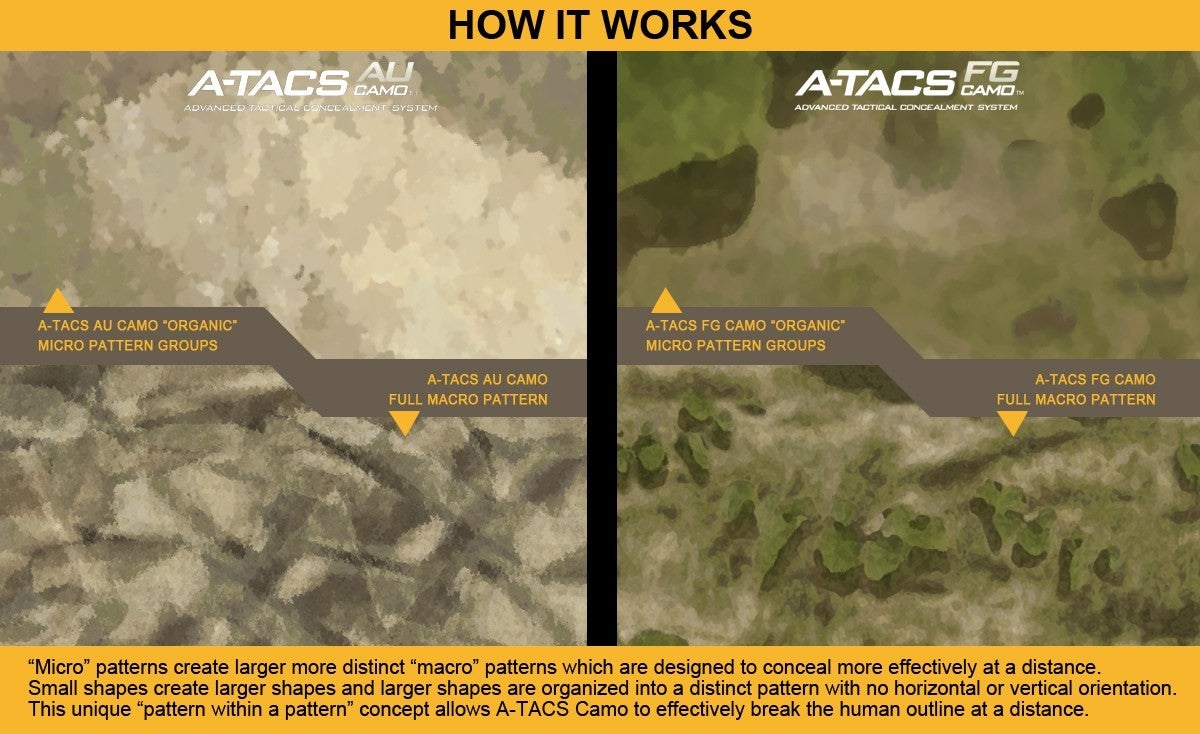 A Few Words from the Inventors of A-Tacs Camo.

Currently deployed with various Tactical Professionals, Law Enforcement and Special Operations personnel in a wide array of hotspots around the globe in a relatively short time, A-TACS Camo has become one of the most trusted “go-to” force protection and concealment systems on the planet. A-TACS Camo patterns are designed for maximum effectiveness in the widest possible range of operational environments worldwide. We simply don’t subscribe to the “one pattern fits all” approach. We developed our patterns to perform in climatic zones–containing either arid climates or, green temperate climates.

While our patterns are digital in nature, we do not use square pixels, rectangles or other un-natural geometric shapes in the design of our patterns. Square pixels do not replicate the shapes, forms and shadows of most of the environments they are deployed in-especially when viewed through optics. The ninety-degree angles and limited use of natural colors can, in many cases make detection easier. Small, busy square digital or fractal geometry patterns also tend to close-up producing a “blobbing” effect that betrays the wearer when viewed from a distance. A-TACS Camo addresses and improves these critical issues in three ways.

Totally unique to us, we use small “micro” patterns to create larger more distinct “macro” patterns which are designed to conceal more effectively at a distance. Small shapes create larger shapes and larger shapes are organized into a distinct pattern with no horizontal or vertical orientation. This unique “pattern within a pattern” concept allows A-TACS Camo to effectively break the human outline at great minimizing the “blobbing” effect when viewed from a distance.

More effective use of color-range produces a better concealment system. A-TACS Camo patterns are created using a far greater range of inter-mingled natural colors that are blended and overlayed into one another creating a more naturalistic appearance.

A-TACS AU (Arid/Urban) Camo utilizes numerous shades of green sampled directly from a variety of arid and urban elements combined with various shades of earth and small amounts of green, A-TACS AU Camo is designed to be effective in a wide range of temperate environments and utilizes. This pattern was the first to utilize our patent pending process whereby organic pixels in the micro patterns are grouped into larger, more defined “macro” shapes creating larger more defined patterns designed to be viewed from a distance. 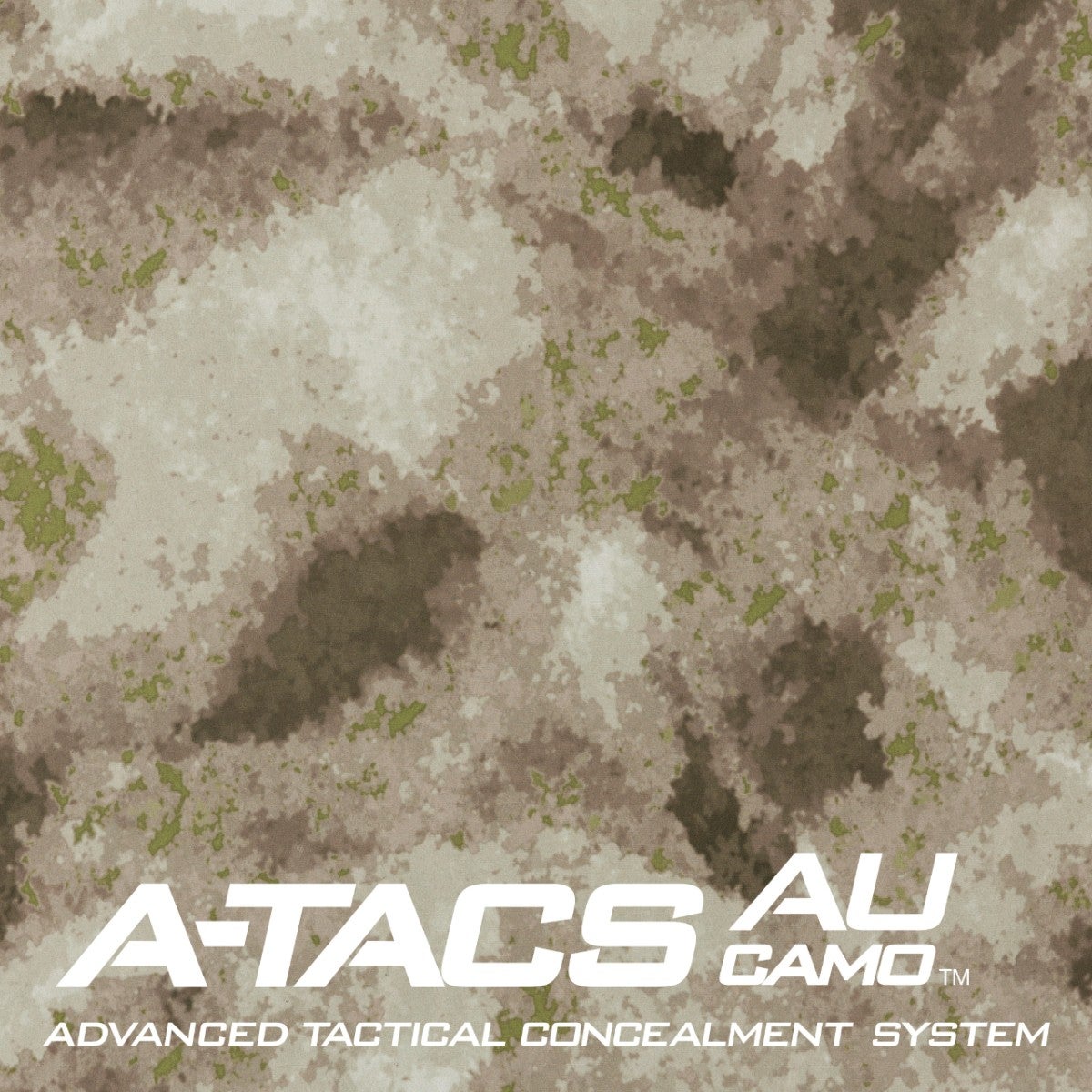 A-TACS FG (Foliage/Green) Camo utilizes numerous shades of green sampled directly from a variety of forested and transitional terrain elements combined with various shades of earth, A-TACS FG Camo was developed to be effective in a wide range of temperate environments.

As with the original A-TACS AU (Arid/Urban) Camo pattern, the organic pixels in the micro patterns are grouped into larger, more defined “macro” shapes creating larger more defined patterns. The larger organic shapes and strategically placed shadow elements within the macro pattern help to create a unique three-dimensional effect when viewed from a distance. 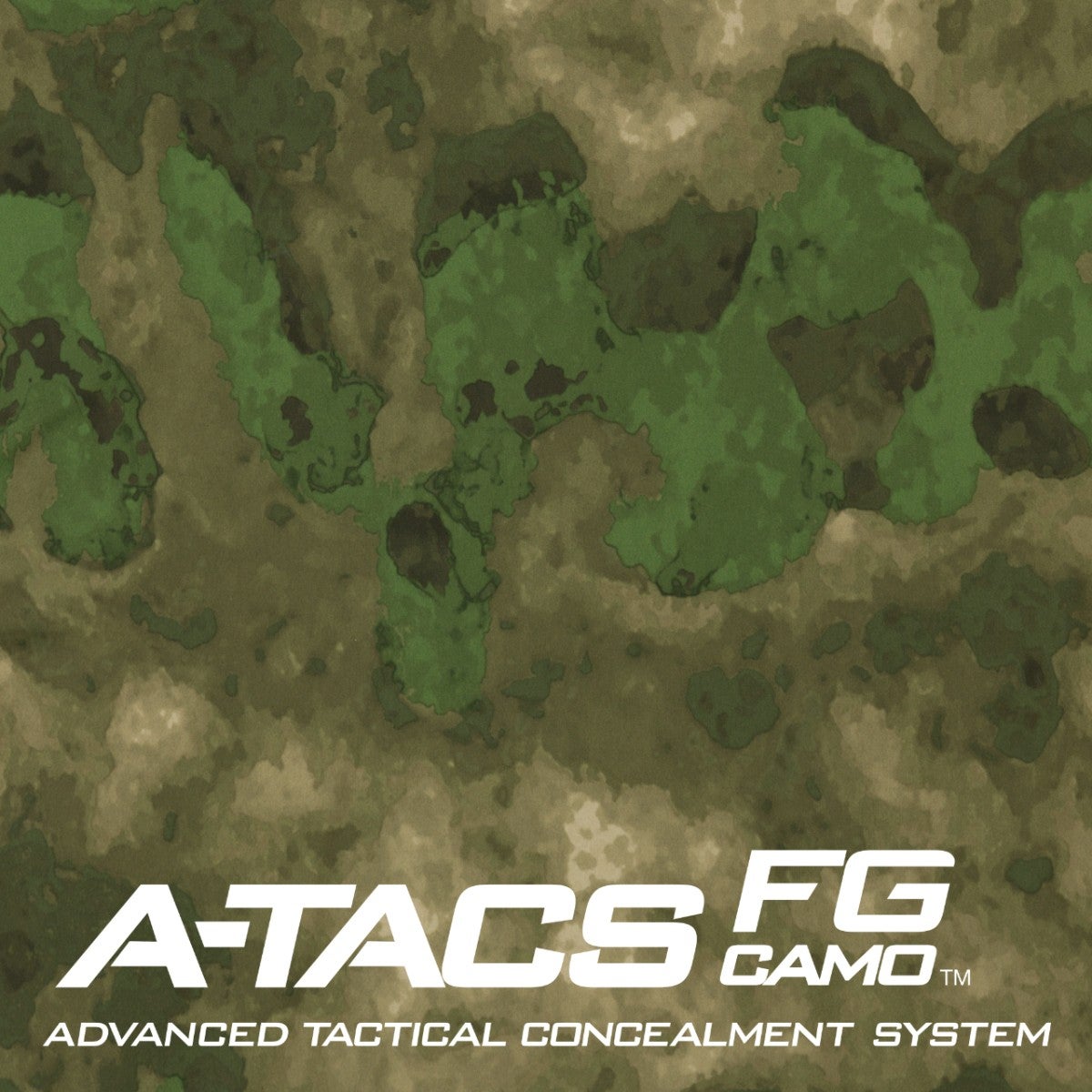