Each year for the last decade Browning has recognized an outstanding Marine combat veteran with the award of a guided hunt and a new Browning firearm. This year the award goes to Major Peter Ankney. Major Ankeny is a decorated veteran with over a decade of deployments under his belt. Jon Leonard, representing the organization "Hunts for the Brave" came to Browning to award Major Ankney with a special, guided turkey hunt. In conjunction with this, Travis Hall, President and CEO of Browning presented Major Ankney with a special Browning Silver NWTF Turkey shotgun.

Leonard explained that many of the combat veterans that have been involved in the wide variety of programs offered by Hunts for the Brave have expressed that "there is a tremendous therapeutic effect that comes from hunting and being in the outdoors, and that they and their families greatly benefitted from the programs." 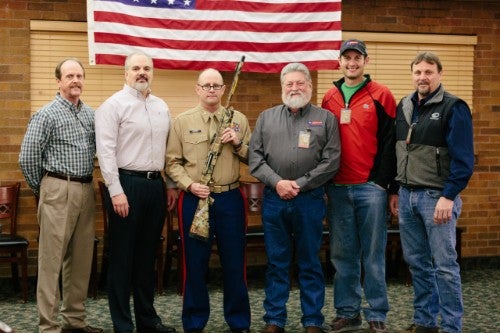 Jon Leonard (gray shirt) of Hunts for the Brave is shown on Major Ankney's left. 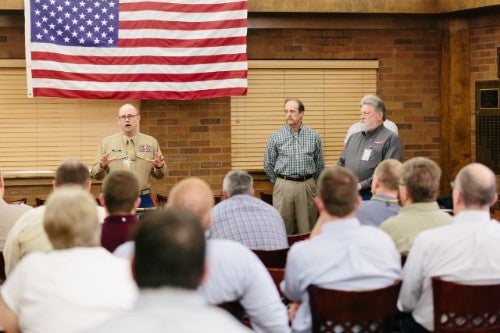 Major Ankney talks about his experiences with the employees of Browning. 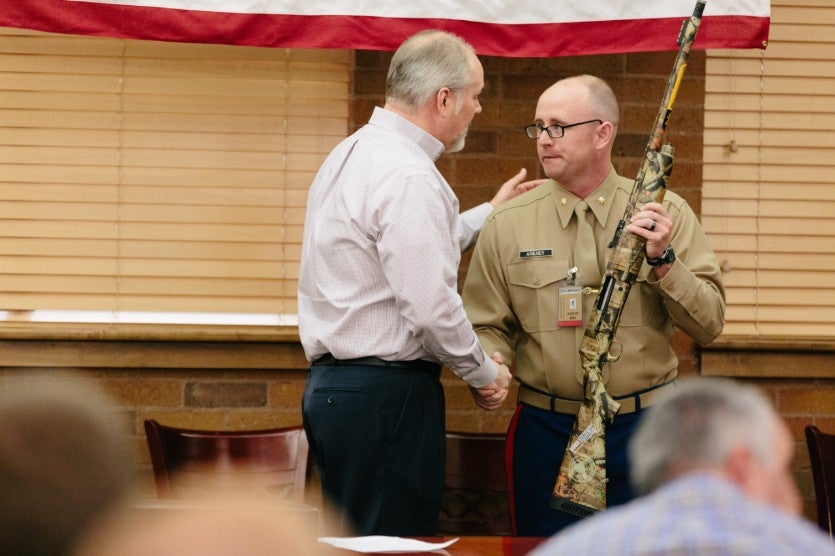 Travis Hall is shown presenting the award to Major Ankney.  Following the presentation, Major Ankney said, "I'm extremely honored on the behalf of all service members who have benefited from the hard work and patriotism of the local community . . .  and today I would like to offer a special thanks to members of the organization "Hunts for the Brave" and to Browning."

Continued . . . In his humble way, Major Ankney explained "I have been successful in the Marines simply because of serving with good Marines."

On behalf of Browning, Hall remarked, "Day in and day out we do what we do and live as we do because people like Major Ankeny are protecting our freedoms."

Browning is proud of its tradition supporting the men and women of the United States armed forces. For well over a century Browning has proudly supported America’s armed services with the best military firearms designs possible. John M. Browning’s legendary 1911 .45 ACP pistol, the Browning Automatic Rifle and the .30 and .50 caliber Browning machine guns have all won the lasting respect of generations of US combat veterans.

Major Peter Ankney is an Infantry Officer and was born in Billings, Montana, graduating from Montana State University—Bozeman in May 2003.  After commissioning in the Summer of 2003, he attended The Basic School and Infantry Officer’s Course in Quantico, Virgina.

In June 2007, Major Ankney assumed the duties of Platoon Commander, 3d Fleet Antiterrorism Security Team Company in Norfolk, Virginia.  In this capacity, he forward deployed to Guantanamo Bay, Cuba, and Bahrain. In May 2009, was reassigned to 1st Fleet Antiterrorism Security Team Company  where he served as Commanding Officer and Company Executive Officer.  In response to the Haiti earthquake in January 2010, Major Ankney deployed as the platoon commander of the Alert Contingency Platoon to reinforce the American Embassy.

After graduating from Expeditionary Warfare School in May 2011, Major Ankney checked-in to 1st Battalion, 7th Marines in Twentynine Palms, California.  From June 2011 – May 2015, he served as Company Commander, Battalion Operations Officer and Battalion Executive Officer.  He deployed to Helmand Province, Afghanistan in March 2012 and March 2014. 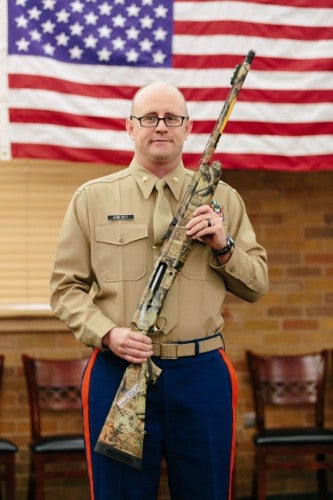 Hunts for the Brave

“Hunts for the Brave” is committed to seeking opportunities and the means to improve the lives of the “Brave” as our way of showing gratitude, rewarding exceptionalism, and otherwise acknowledging the “Brave” for their service, actions, and sacrifices. We will provide outdoor-related recreational activities for the “Brave” and their families in order to promote healing, bonding, and the strengthening of family relationships and values. Read more on their website.

Browning’s CEO Travis Hall expressed great satisfaction with the program. “We at Browning are truly proud of all those that serve and protect this nation! It is truly humbling to be able to recognize an outstanding Marine combat veteran each year through this program. Hopefully we will provide them with a great hunting experience in honor of their great service.”

As selected by his or her Marine Corps peers, last year’s winner was Captain Scott A. Furlong. Growing up in Utah, Furlong attended Layton High School and earned his Eagle Scout badge at age 17. He graduated with a degree in history from San Diego State University and was commissioned an officer in the US Marine Corps in 2008. Furlong served one tour of duty in Afghanistan with the Marine Special Operations Command and the Joint Special Operations Command and was awarded the Navy and Marine Corps Commendation Medals, Afghanistan Campaign Medal and the NATO Medal. Captain Furlong is currently serving as the Operations Officer at the Salt Lake City USMC Recruiting Station.

“This is the fanciest shotgun I’ve ever seen or held!” smiled Furlong during the award ceremony at Browning headquarters in Mountain Green, Utah. “It’s a great honor to accept this award on behalf of all our veterans who have served in Iraq and Afghanistan. Thank you again for your support and for all you do for our veterans.”

Major Lance Day, USMC, himself a previous awardee recounted the highlights of his own wild turkey hunt and echoed Furlong’s sentiments. “I sure appreciate Browning keeping this program and the firearms industry going. I hadn’t done much hunting until I got to Utah. It’s a great feeling to go hunting, especially when nobody is shooting back! Thanks for all your support.”

“It’s our intent to honor their valiant military service,” said John Leonard, who has coordinated the project. “It also has great therapeutic value for combat veterans and in some cases it may be their very first experience with hunting.” 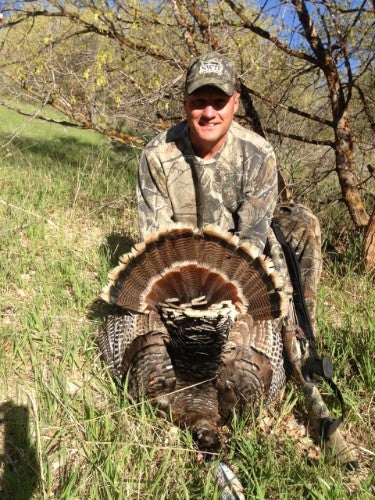 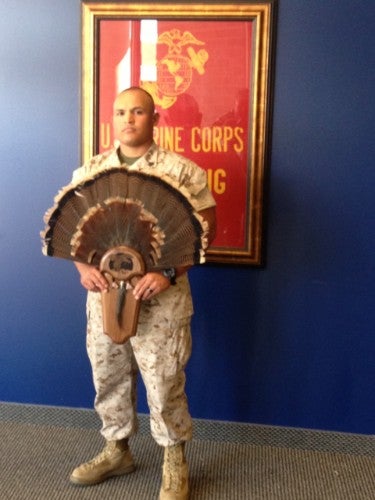 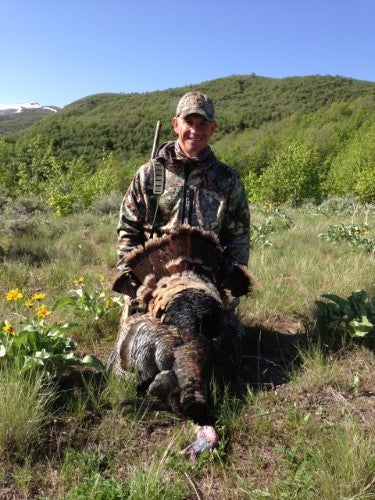 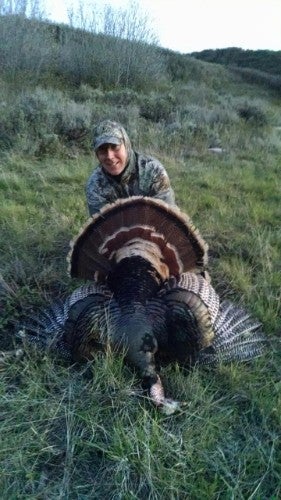