America Puts Boots on the Ground and Planes in the Air.

Over 75 years ago the Mighty Eighth Air Force Began Combat Operations in England.

All of us at Browning are proud of the contributions made by our founder, John Moses Browning, to the defense of freedom around the world for over 100 years. His genius and patriotism gave the U.S. and her allies the superior tools needed in two world wars and various other conflicts. Thank you Mr. Browning.

As America entered WWII with the surprise air raid by the Empire of Japan on the US fleet in Pearl Harbor, the country was faced with a great dilemma – how to effectively fight a two-front global war against several heavily armed enemies with only a small, peacetime Army and Navy.

The military strategists quickly came up with the “Europe First” doctrine. America would put its offensive fighting emphasis on defeating Nazi Germany first, while at the same time fighting a defensive or holding action against Japan in the Pacific.

There was one major problem with this doctrine. While America had numerous Army and Navy bases throughout the Pacific, including Hawaii, Wake, Midway, Guam and the Philippines, it had virtually no military forces based in Europe. 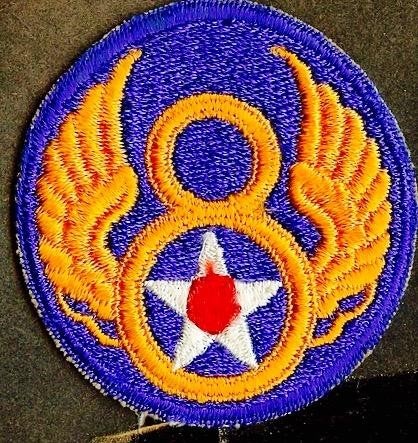 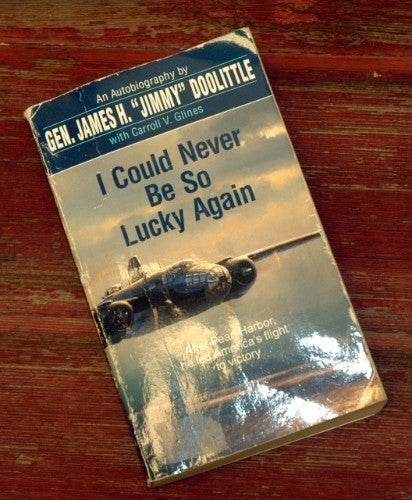 To get the ball rolling, the US Army Air Forces activated the VIII Air Force in Georgia at the end of January 1942 with three sub-groups - a bomber command, a fighter command and a ground services command. These forces immediately began to assemble at Langley Field in southeastern Virginia.

American flyers first put boots on the ground in England a few weeks later, and the initial trickle of US aircraft and aircrews quickly became a flood, and, as American industry shifted into full wartime production, it became an unstoppable tidal wave.

The first European bombing mission, using an RAF plane flown by a single American crew from the Eighth was conducted in late June of 1942 against a railway target in Hazebrouck, France.  A week later, fittingly on July 4, a full half-dozen RAF planes, all crewed by Americans, attacked several German airfields in Holland. This was also the first combat mission on which Americans were shot down and captured by the enemy.

As an official online USAF history recounts, “During World War II, under the leadership of such generals as Ira Eaker and Jimmy Doolittle the VIII BC (then Eighth Air Force) formed the greatest air armada in history.”  YOU CAN READ MORE ABOUT THE 1942 DOOLITTLE RAID HERE.

“By mid-1944, the unit had a total strength of more than 200,000 people, and it could send more than 2,000 four-engine bombers and 1,000 fighters on a single mission against enemy targets in Europe. For this reason, Eighth Air Force is commonly known as the ‘Mighty Eighth.’” 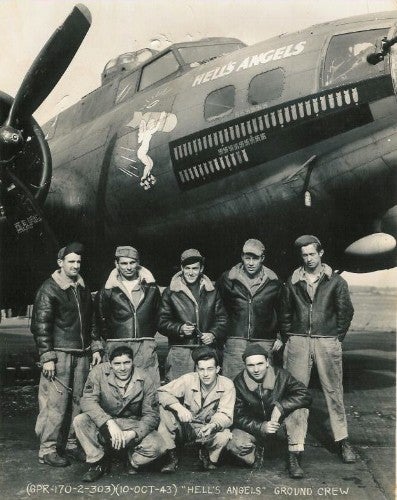 Wrenches in hand, the proud ground crew of the B-17 “Hell’s Angels” in England in 1943. Wikipedia photo.

“From May 1942 to July 1945, the Eighth planned and precisely executed America's daylight strategic bombing campaign against Nazi-occupied Europe, and in doing so the organization compiled an impressive war record. That record, however, carried a high price. For instance, the Eighth suffered about half of the U.S. Army Air Force's casualties (47,483 out of 115,332), including more than 26,000 dead.” 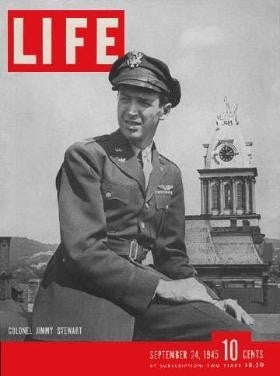 Col. Jimmy Stewart, one of the better-known pilots in the Eighth Air Force, appeared on the cover of LIFE magazine in 1945. 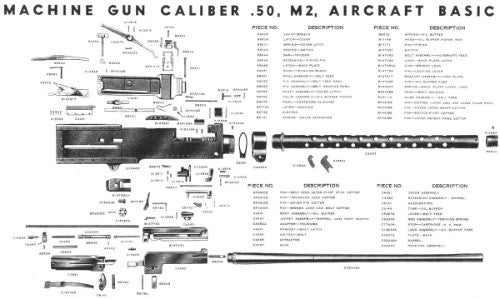 One of the Eight’s Air Forces better-known members was the actor, now pilot Jimmy Stewart. Stewart enlisted in the Army Air Corps in 1941 as private, long before Pearl Harbor, then earned his wings and headed to England with the Mighty Eighth. He officially flew 20 combat missions as a command pilot (and legend has it he flew many more that he didn’t officially log or take credit for) including leading a 1,000-plane bombing raid on Berlin. He remained in the US Air Force Reserve and retired as a brigadier general in 1969.

During this period, virtually every American and Allied combat aircraft was equipped with machine guns designed by John M. Browning. Both .30 and .50 caliber versions were utilized during WWII, but as Allied and enemy combat aircraft grew in size and durability, evolving from the original fragile wood, wire and fabric contraptions to all metal construction, the .50 Browning came to dominate the skies over Europe and the Pacific.

Among the numerous combat aircraft used by the Eighth, the most iconic were the Boeing B-17 “Flying Fortress,” the North American P-51 “Mustang,” and the P-47 “Thunderbolt” from Republic Aircraft. 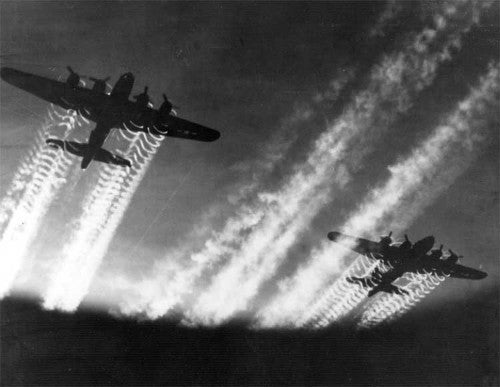 A formation of B-17s produce contrails on the way to their targets somewhere over Europe. USAAF/Wikipedia photo. 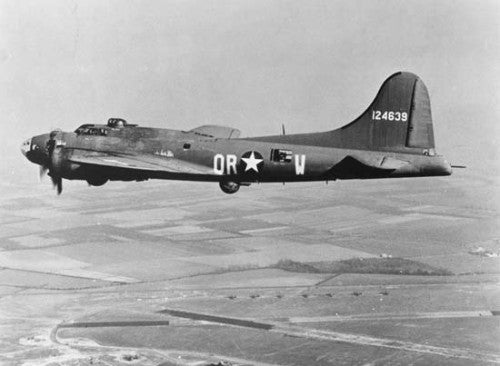 The B-17 was a four-engine, low wing heavy bomber with a crew of 10, that was much beloved for the plane’s ability to absorb tremendous battle damage and still return to base. Along with its bomb load, The B-17 often had a dozen or more .50 caliber Browning guns, including paired guns in the nose, top turret, bottom ball turret and tail gunner positions, plus guns on the right and left sides in flexible mounts, located at both the nose and the midpoint of the aircraft to cover the flanks. Each gun was positioned to cover a specific sector of sky to give both the individual plane and the formation it which it flew maximum protection from enemy fighter attack. 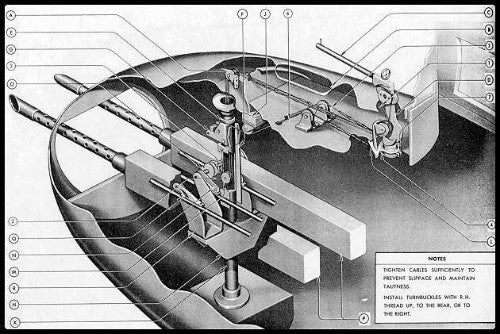 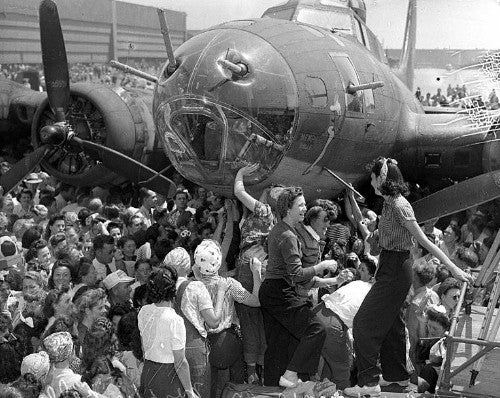 Here the “Memphis Belle” is thronged by admirers in Los Angeles on her post-combat morale tour of the USA. You can see four .50 caliber Brownings located in the Plexiglas nose and on front sides of the aircraft. Wikipedia photo.

Among the most famous of the B-17s produced was the “Memphis Belle” which was the first plane to complete the required 25 combat missions before its crew would be rotated to non-combat assignments. The subject of a 1944 wartime documentary film and the centerpiece a dramatic motion picture of the same title in 1990, the “Belle” became symbolic of the thousands of B-17s flying combat missions throughout the war. It’s still on display at the National Museum of the USAF in Dayton, Ohio. 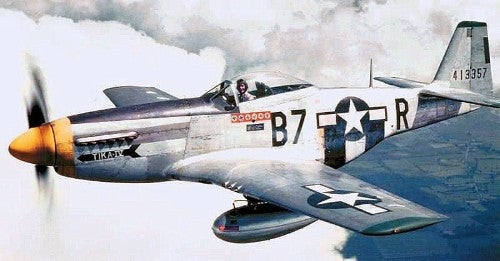 The P-51 was fitted with a half-dozen wing-mounted .50 caliber Brownings and was the plane Capt. Chuck Yeager flew on 12 October 1944 to become an ace, downing five enemy aircraft on a single combat mission. 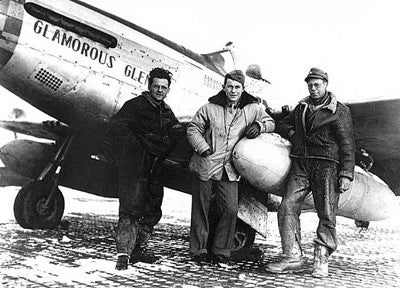 Chuck Yeager, center, and his ground crew pose with his P-51 nicknamed “Glamorous Glennis” in honor of his girlfriend (who later became his wife). In 1947, Yeager became the first pilot to break the sound barrier. Chuckyeager.com photo.

The Boeing website gives an excellent overview of the P-51. “Although first designed for the British as a medium-altitude fighter, the Mustang excelled in hedge-hopping strafing runs and long-range escort duty. It made a name for itself by blasting trains, ships and enemy installations in Western Europe and by devastating Axis defenses before the Allied invasion of Italy.”

“The Mustang was the first single-engine plane based in Britain to penetrate Germany, first to reach Berlin, first to go with the heavy bombers over the Ploiesti oil fields in Romania, and first to make a major-scale, all-fighter sweep specifically to hunt down the dwindling Luftwaffe.” 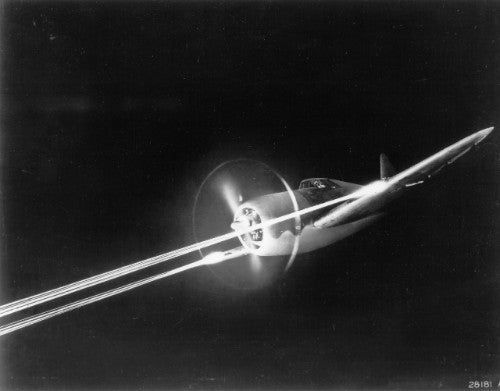 An early variant of the Republic P-47 on a night strafing run. Wikipedia photo. 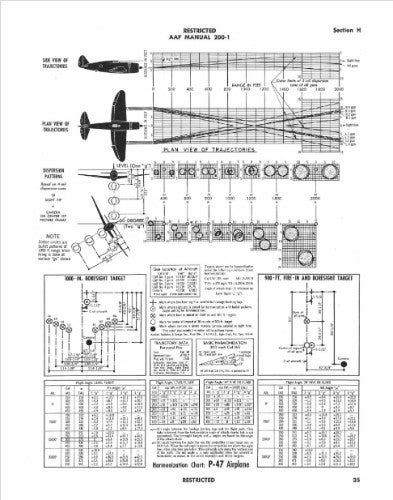 As capable as the “Mustang” was against ground targets, the P-47 was the premier American ground attack aircraft in Europe during WWII. The eight .50 Browning machine guns in the wings of the “Thunderbolt” could put out 13 pounds of lead per second and created devastation downrange. Due to its less-than-sleek appearance, the P-47 was often affectionately referred to as the “Jug” by her pilots, who knew the rugged ship would almost always bring them back home.

Click here to see some WWII vintage gun camera footage of a P-47 in the ground attack role. https://www.youtube.com/watch?v=3t8nlIaQJaI

And on the 75th anniversary of the deployment of the Eighth Air Force to England, we at Browning offer a crisp salute and a heartfelt ‘thank you’ to all the members of “The Greatest Generation” for their courage and sacrifice in air battles, large and small, in the cold skies somewhere over Europe. 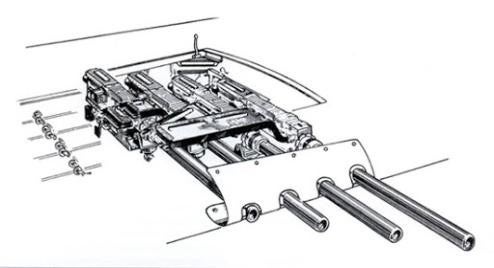 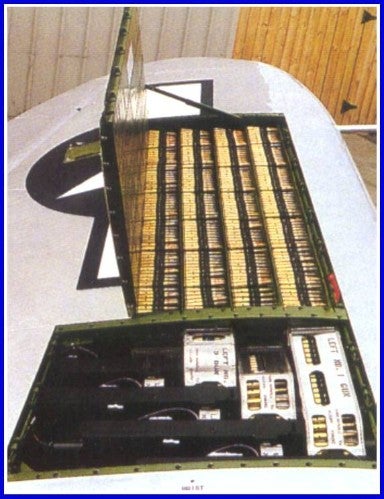 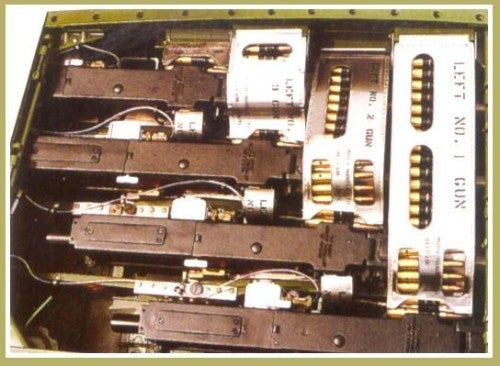 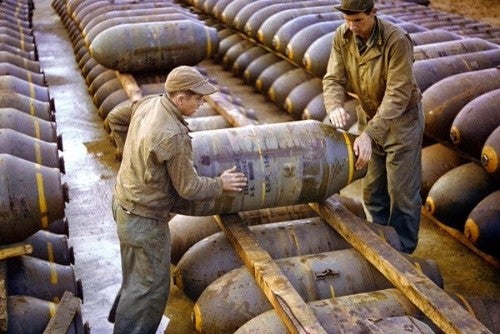 Copyright Browning 2017. Photos copyright as indicated in captions or in the public domain. History written and edited by Brownng staff writer, Scott Engen.