Browning and the Unbranded Mustangs.

The Ride. The Mission. The documentary UNBRANDED follows the story of Ben Masters, Thomas Glover, Jonny Fitzsimons, and Ben Thamer as they travel 3,000 miles through the deepest backcountry in the American West from the Mexican border to the Canadian border. The pack trip will take over six months through Arizona, Utah, Idaho, Wyoming, and Montana in famously rugged country such as Yellowstone, the Grand Canyon, and the Bob Marshall Wilderness. Mustangs, born and raised in the wild, will be taking them on their journey. This is a story of the partnership between horse and rider, a testament to the hardiness of mustangs, and a tribute to the early explorers whose spirit remains today. Luckily for us, this adventure just happened to pass by Browning.

We a Browning are proud to have a part in giving the Unbranded riders a few special days of rest and recreation here at Browning in Morgan, Utah. The goal of unbranded was not about hunting or shooting or Browning, but it was about the great spirit of adventure that was part of the great westward migration of the mid 19th century. It is a spirit that we at Browning appreciate because it was out of the west that came the greatest gunmaker the world has ever known.

We remember when they visited us here at our corporate offices just north west of Morgan, Utah. We saw four young Texas cowboys, their faces burned red and brushy beards beached by an unrelenting summer sun are on the trail, riding 14 wild mustangs up from Mexico to Canada. They spent three years planning for the adventure that took all summer as they chase the receding winter snows northward on a journey – a ride through history. Adopted from the BLM’s wild horse round-ups, their sturdy mustangs are ideal for this journey. Descended from the wild horses that have roamed the American West for centuries, these animals are sure-footed, boot-leather tough and don’t break down even after weeks of hard riding, unlike their well-bred modern counterparts. The four horsemen from the Lone Star State were, admittedly, a modern throwback to a simpler time - a time when young men much like themselves, living and working on horseback tamed an entire continent.

On a patch of ground just West of the Browning offices on Browning land is a corral and a pasture. It has seen its share of cattle over the years, but tonight it will have some very unique visitors -- four young college men on a journey of adventure -- riding wild mustangs from the Mexican border up through the wilderness and backroads of the West all the way to Canada. On this day their journey brings them to Browning. 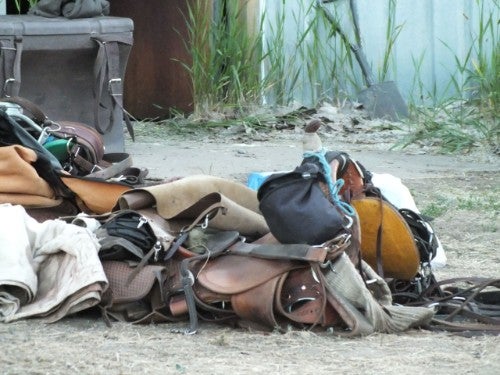 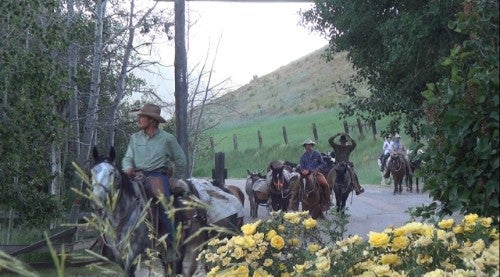 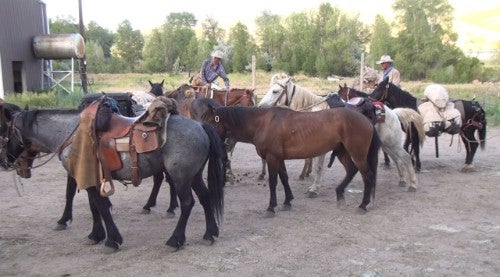 Today they are sitting down for their first hot meal in several days, a lunch at the Browning offices in the brushy foothills of Northern Utah. We took a moment to ask two of them, Ben Masters, 24, of Amarillo, and Thomas Glover, 23, of Houston, to share some thoughts after being on the trail for about two months and some 1500 miles. One can instantly tell by their posture that, even with the strength of youth the last several weeks have taken a physical toll. Backs become stiff, limbs become cramped and the term ‘saddle sore’ takes on a harsh and personal reality that mere flatlanders and city folks can’t fully appreciate. Sitting quietly at a dark wood table, their aches and pains are dulled for the moment as the fire of adventure burns brightly in their eyes – eyes that have squinted into the setting sun and taken in the grand vistas of today’s American West.

“I’m amazed at how big the West really is, and how much land is still untouched and undeveloped,” noted Masters between enthusiastic bites of a hot roast beef sandwich. “We don’t see that much any more, even in Texas.”

“And how simple this life can be,” chimed in Glover “You do come to appreciate things like air conditioning, turning on a tap and getting hot water, but being out on the trail helps reduce the noise of modern life.”

While their mustang horses are holding up well, not all has been smooth sailing thus far. “The worst was the shear terror of watching all 14 horses spook at once and scatter,” said Masters “We were on foot for two days rounding them all up. We were wondering if we’d ever get them back.”

After a few days of rest here at Browning, their trip will take them from the rugged deserts of Arizona and Utah into the even more rugged mountains of Wyoming, Idaho and Montana.

“We’re excited,” agreed Masters and Glover. “We’ll be getting into the real back country now. It the past we’ve only been a few days from a paved road or a town. Now we’ll be a week or more away from civilization.”

As they returned to their meal, a thought strikes you and resonates deep within. These are four fine young men, filled with a pure sense of awe and adventure. They are dedicated and determined to succeed in their grand quest. They are proud of the miles behind them and yet are looking forward to the trail ahead.

They are very embodiment of what our nation once was, and hopefully, what, somewhere deep inside, we still are. As John Steinbeck once said “A man on a horse is spiritually as well as physically bigger than a man on foot.” These are four young giants on the trail into history.

We at Browning understand the undying spirit of adventure that drives these young men. We wish them well, and we’ll continue to report on their progress. 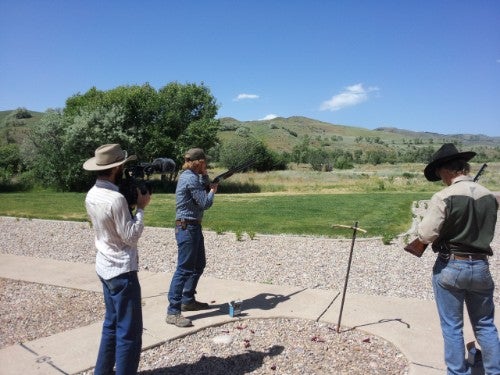 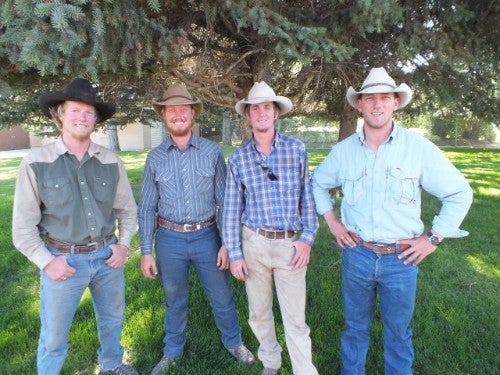 DAY THREE. The four cowboys on their amazing  Mexico to Canada UNBRANDED wild mustang adventure are still camped out down at the old Browning farm. These are not first class accommodations for sure. But these trail-worn, hardened guys don't seem to mind. They are taking a few days to rest their horses here at Browning. Plus it is a good time to take a break since they are about half way through their adventure and need a bit of R&R. 1,500 out of 3,000 miles have gone under foot (actually under hoof). Today they are waiting for an expert horseshoer (officially called a farrier) to arrive. He has been shoeing their horses along way. Word is he may not get here until tomorrow.

The trail has been grueling. A mix of rocky high country trails along with a few gravelly shoulders and hard asphalt. A special type of horseshoe is used that can take it. Their farrier uses three metals welded together -- starting with tungsten. The other metals, apparently, are a secret. Browning is at a crossroads, so luckily a few of their support team was able to catch up with them today. The riders and the film crew all dropped by at lunchtime for a home cooked, hot meal in the Browning cafeteria.

These photos show the UNBRANDED riders and their mustangs as the head up out of the South Fork of the Ogden river, past Red Rock and up onto the high desert mountains northeast of Browning. Several Weber County Search and Rescue riders guided them up past Causy Reservoir up onto a trail often called the "Skinto Tral." They continued up until they arrived at Causey Spring, where they camped for the night.

Causey reservoir's north branch is a creek called Wheatgrass. Up a small drainage to the north -- right where the UNBRANDED riders crossed Wheatgrass -- is Camp Browning. Camp Browning is a summer camp operated by the Trapper Trails Council of the Boy Scouts of America. It is a high adventure camp for the older 14-18 year-old scouts and it's primary activity is, of course, shooting. 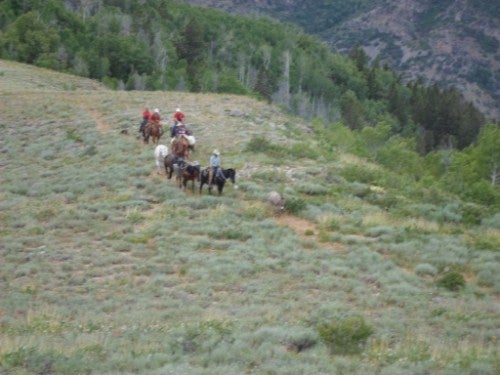 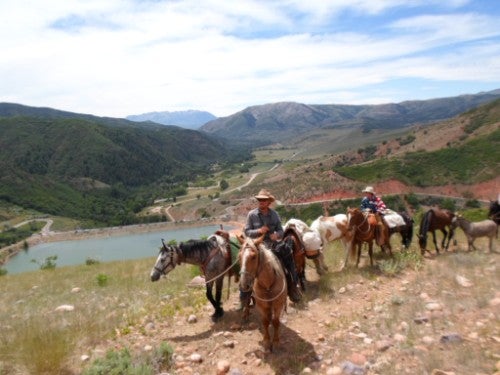 A Synopsis from Unbrandedthefilm.com. 3000 miles, 12 horses, 5 states, 4 men, 1 goal: to complete a 6-­-month journey that was once a reality for the western frontiersman and still stirs in the human spirit. UNBRANDED follows four young men as they take on a monumental challenge that will change them forever.

Having recently graduated from Texas A&M, Ben Masters, Jonny Fitzsimons, Ben Thamer and Thomas Glover are delaying their entry into the job market to embark on the adventure of a lifetime. Ben Masters’ dream is to ride horses through the great American West from Mexico to Canada. It took no time to convince his college buddies to go along with him. Each one begins the adventure with his own dreams to fulfill, knowing full well that hardships and hazards come with the territory. They'll face unrelenting heat, freezing temperatures, hail and lightning storms, rattlesnakes, Grizzly bears, raging river crossings and high mountain passes buried in snow. We will travel with them as they blaze a trail through Arizona, Utah, Idaho, Wyoming and Montana. The backdrop for this incredible journey will be our majestic public lands, including the Grand Canyon, Yellowstone, and the Bob Marshall Wilderness Complex.

But one more x-­-factor has been added to the journey of these young explorers. For their trail horses, they’ve chosen wild mustangs. After hundreds of years of natural selection while roaming the rocky terrain of the West, this breed is perfect for the UNBRANDED team. The film will follow the nerve-­wracking process of adopting mustangs, which have only known fear of humans, and watch as that fear is transformed into hard-­won trust. These spirited animals were also brought onboard to raise awareness of the plight of thousands of mustangs that are in holding facilities across the United States. A century ago, there were 2 million mustangs living in the wild. Today, there are approximately 37,000 roaming free in the U.S. with more than 43,000 living in holding pens. They await a horse adopter who rarely comes, but with new adoption programs in place from the Mustang Heritage Foundation, we are given hope.

UNBRANDED is a rite-­of-­passage story like no other. Traveling with these four adventurers will immerse us in the beauty and romance of the Wild West, and show us why these lands are so vital to the history and future of America. We’ll be front and center as our foursome communes and clashes with Mother Nature on a pilgrimage of exploration, exaltation and exhaustion. They symbolize the true American spirit, choosing to follow their hearts into open country before they cross the threshold into the "real world" of demand and responsibility. In joining them, the viewer will be transported and inspired to reflect on the wild hopes and dreams that perhaps still burn in their own hearts. One thing is certain, these men are living their dream -­- undaunted, untethered, UNBRANDED. 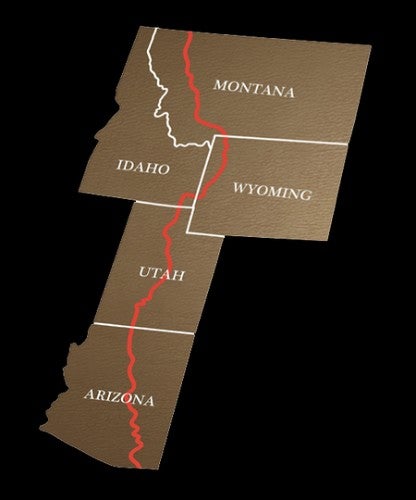 Synopsis and video copyright UNBRANDED, 2013, 2016. A special thanks to the riders, the entire crew and the supporters of this project for allowing Browning to use this content. Special thanks to Allen Melle of the Weber County Search and Rescue for acting as the initial contact with UNBRANDED and for personally showing them the way toward Bear Lake and on into Idaho ahd Wyoming, riding with them on the Skinto trail above Causey reservoir, north of the Browning offices over Trapper's Loop . . . cutting through the range called Monte Cristo.