In 1890 John Browning saw some tall grass move, and it changed history.

Where did John Moses Browning get his inspiration for what would eventually became one of the most significant developments in firearms history?

Most of you reading this post are very familiar with the Browning brand, and many of you know that the company was originally founded in 1878 by the legendary firearm designer John M. Browning. If you’ve served in the U.S. military at any time over, say, the last century, you’ve also heard fellow servicemen (and servicewomen) refer to small arms like the .50 caliber M2 Browning Machine Gun or Browning Automatic Rifle, the famous “BAR.”

John M. Browning was the foremost pioneer of automatic firearms.

So just how did all these military guns get tagged with the Browning name? Quite simply because John M. Browning was the foremost pioneer of automatic firearms, and because he designed most of the automatic firearms that were used by the U.S. and her Allies from the Spanish American War in 1898 right on through WW I, WW II, Korea and Vietnam. In fact, several of his classic designs, like the robust Model 1911 .45 ACP pistol and the impressive M2 .50 caliber Browning machine gun are still in active service today.

What you may not know is how John M. Browning got the idea for harnessing the energy released when a cartridge is fired to cycle the action, eject the fired case and load a fresh round from the firearm’s magazine. That’s one of the great stories of American gun lore.

The original "Flapper" prototype, restored to near working condition.

The original comes home. At the time that the rifle was returned to Ogden's Browning Firearms Museum the Ogden Standard Examiner put the event in perspective. "In early 1890, famed Ogden gunmaker John Moses Browning was out sport shooting with his brother, Matthew. He noticed that as he fired his rifle, the nearby salt brush, bulrushes and assorted weeds moved. Realizing that the energy from this blast of muzzle gasses could be harnessed, Browning and his brother headed back to the family’s Ogden gunmaking shop. Over the course of the next couple of days, they designed the “Flapper,” a gas-powered machine-gun prototype that would eventually lead to the AK-47 and the M-16 — not to mention every automatic weapon used by the Allies in the Second World War."

Today the Flapper is where is always should have been -- back in Utah, on display in the Browning Firearms Museum at Ogden’s Union Station.

At the unveiling, museum manager Amanda Woolley stated “It’s really quite historic . . . for any gun enthusiast, this is the holy grail. This was the beginning of (Browning’s) machine guns, and that was a game changer in the war.” 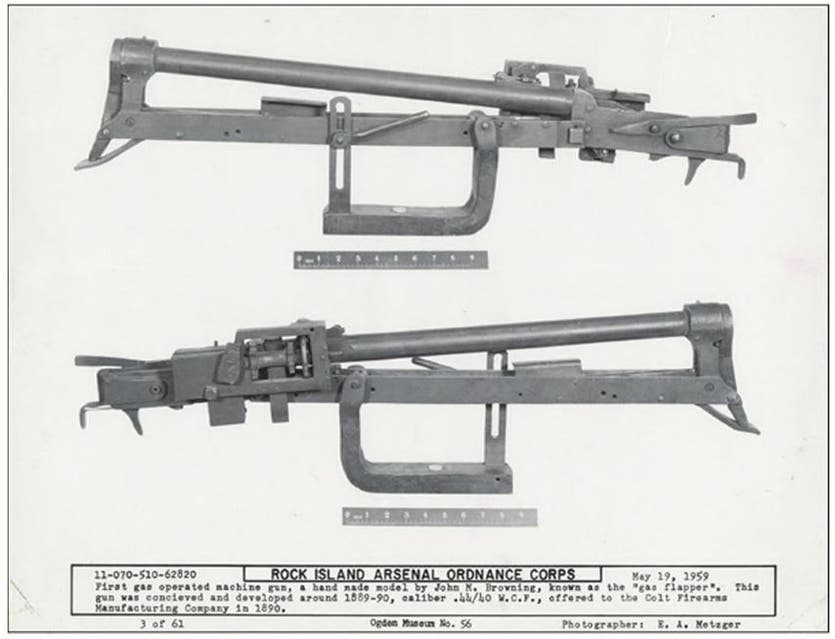 This is a prototype made much later  by John Browning using the flapper concept.  The photograph is from a much more recent date.  It was at one time erroneously considered the original flapper prototype. As you can see, the original was based on a Model 1873 action. This prototype is a bench test version employing more sophisticated machining and geometry.