As our country celebrates Presidents Day, we can look back on a long line of national leaders who have enjoyed the outdoors, and some who were even credible marksmen and hunters. But of all our Chief Executives, none stands taller in the deep woods or on the African veldt than Theodore Roosevelt, our 26th president.

Born in New York City in 1858, Roosevelt began life as a weak and sickly child. Determined to overcome his physical limitations, Roosevelt exercised relentlessly and eventually emerged as a robust adolescent, strong enough to prove a capable horseman, boxer and wrestler.

Roosevelt had a lifelong fascination with nature and wildlife, and in his youth collected numerous birds and small mammals, which he studied, classified and even stuffed for display. He also recorded his hunting and gathering experiences in great detail in his journals, many of which became the sources for numerous books and magazine articles.

Following the sudden death of both his wife and his mother on the same day in 1884, a devastated and grieving Roosevelt abandoned local politics and struck out for the Dakota Territories, seeking solace in the simple life of a cattle rancher and outdoorsman. 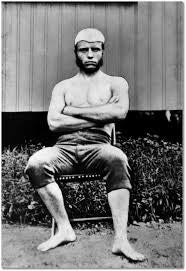 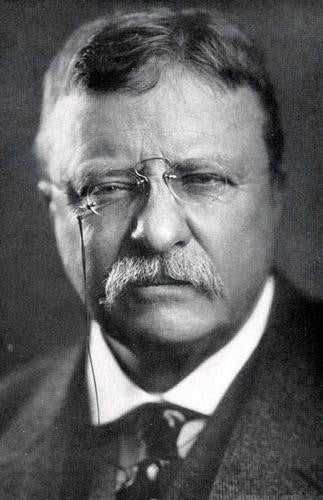 It was in the Dakotas that Roosevelt hit his stride as a hunter, living rough and riding for days at a time on the pursuit of wild game (and, on occasion, as part of a posse chasing cattle rustlers). These adventures are chronicled in three of his books: Hunting Trips of a Ranchman, Ranch Life and the Hunting-Trail and The Wilderness Hunter. Roosevelt was also instrumental in helping found the Boone and Crocket Club. 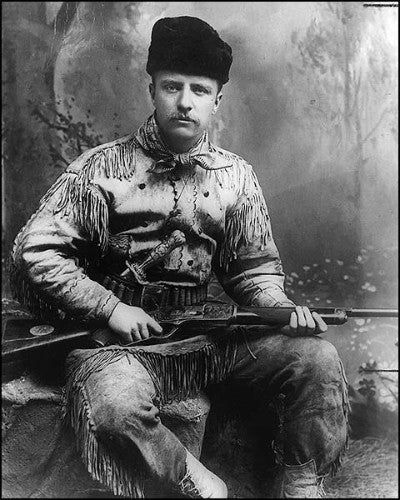 A severe blizzard in 1885 wiped out many of the great cattle herds in the upper Great Plains, including those belonging to Roosevelt. He returned to political life in New York and held a number of public offices, including as federal civil service commissioner, New York City’s police commissioner and Assistant Secretary of the US Navy. 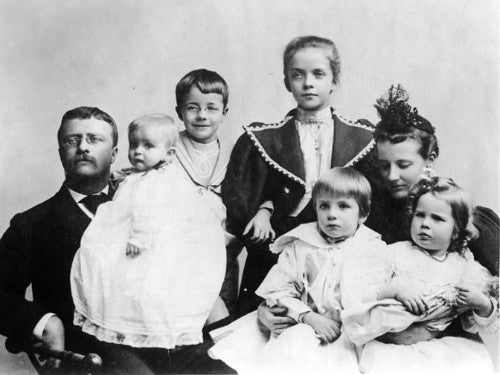 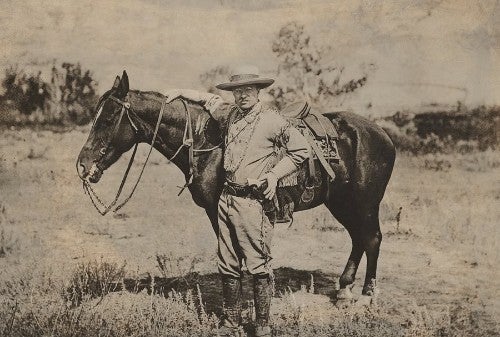 Theodore Roosevelt far afield in the Dakotas, circa 1884. PBS photo.

With the onset of the Spanish American War in 1898, Roosevelt resigned his post in the Navy Department and quickly formed the 1st US Volunteer Cavalry Regiment. Lt. Col. Roosevelt became second in command under Col. Leonard Wood, and the colorful mixed unit of Western cowboys, Ivy League athletes, Eastern society scions, hard rock miners and other rowdy characters soon became world famous as “The Rough Riders.” 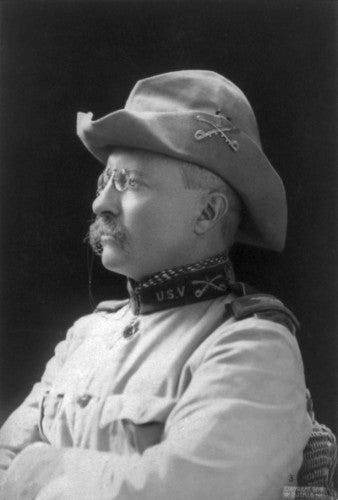 Once ashore in Cuba, Roosevelt led his unit in a desperate charge up Kettle Hill and San Juan Hill, securing the summit and putting the defending Spanish and Cuban troops into a full retreat. Upon reaching the final trench-line, Lt. Col. Roosevelt, Colt revolver in hand fought shoulder-to-shoulder with his troopers. The daring charge, an event that many historians consider Lt. Col. Roosevelt’s finest hour, vaulted him to national prominence.

Upon his return to the US, Roosevelt was soon elected Governor of New York and secured the Vice Presidential spot on the McKinley ticket in 1900. Roosevelt assumed the mantle of the Presidency in 1901 after the death of McKinley in Buffalo, New York, from an assassin’s bullet.

Roosevelt was elected as President in his own right in 1904, and served for a full four-year term. His tenure as President was marked numerous campaigns against graft and corruption in politics, big business and finance, the expansion of federal control over the purity of food and drugs, brokering a peace treaty between Japan and Russia, and the start of the Panama Canal. Roosevelt was also instrumental in developing a national program to promote military and civilian rifle marksmanship and he soon became a life member of the National Rifle Association.

Handing off the reins of executive power in 1909 to William Howard Taft, his handpicked successor, Roosevelt soon departed with his son Kermit on a yearlong safari to Africa under the auspices of the Smithsonian Institution and the American Museum of Natural History. 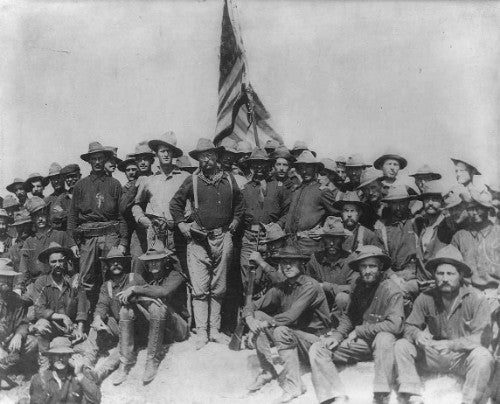 Lt. Col. Roosevelt and his Rough Riders pose with the US flag in Cuba, 1898. Theodore Roosevelt Assn. photo.

The 1898 Spanish American War, while short in duration provided a chance for America to flex its military muscle on the international stage and try some of its newest firearms in actual combat.

One such item was John M. Browning’s legendary Model 1895 gas-operated machine gun. Manufactured by Colt, two of the “Potato Diggers” chambered in 7mm Mauser went ashore with the Rough Riders and were used in several firefights. 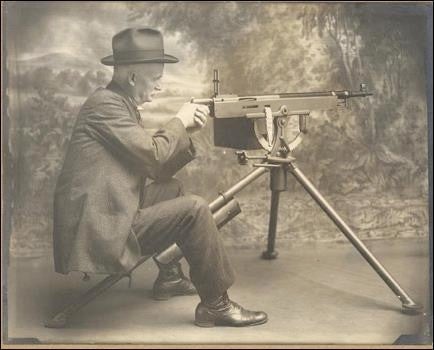 John M. Browning displays one of his Model 1895 “Potato Digger” machine guns. It takes its name from the external lever that operated the gun’s action. It was the first successful gas-operated machine gun. Browning archive photo. 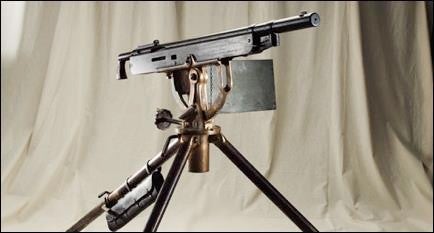 The two Model 1895 machine guns were privately purchased by family members of some of the Rough Riders. One gun’s inscription read in part: Presented to the 1st U.S.V. Cavalry [Rough Riders] by L. and S. Kane….1898. NRA photo.

Roosevelt and his party collected hundreds of large game trophies during the expedition, and the entire body of scientific specimens, ranging from small insects to bull elephants numbered in excess of 10,000, all carefully examined, classified, dressed and preserved for future study. Roosevelt fully chronicled this epic safari in his book African Game Trails.

Kermit and Theodore Roosevelt, along with the Smithsonian safari staff in Africa in 1909. WRA photo.

Over the years Roosevelt favored several firearms for his hunting expeditions. They included Winchester’s Model 1876 and Model 1895 lever-action rifles, the US Army’s then-new .30 caliber Springfield bolt-action, a 12 gauge double barrel shotgun and a double rifle chambered in .500/450 - a potent and robust cartridge capable of stopping the largest and most dangerous game dead in its tracks. 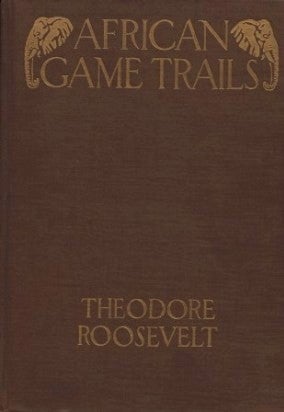 The cover of one of Roosevelt's classic books, African Game Trails. 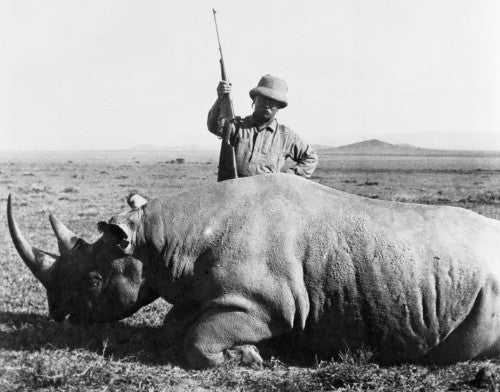 Roosevelt returned to the US after his African safari and took stock of the domestic political situation. Dissatisfied with Taft’s leadership, Roosevelt mounted a campaign for re-election the presidency in 1912. Failing to secure the Republican Party’s nomination, Roosevelt’s supporters formed the Progressive party, which quickly was nicknamed the “Bull Moose” party.

Roosevelt was himself the victim of an assassination attempt in the closing days of the 1912 campaign, and he carried a bullet in his chest for the remainder of his life. As a third-party candidate, Theodore Roosevelt split the conservative vote with Taft, thus ushering the Democrat’s Woodrow Wilson into the Oval Office.

Roosevelt’s final great outdoor adventure occurred in 1913 and 1914, when he led an expedition to discover the headwaters of the River of Doubt deep in the Amazon Basin. Beset by difficult jungle conditions, injury, illness and a myriad of other hardships, the expedition nearly cost Roosevelt his life in the field and severely impacted his health for the remainder of his life. Roosevelt’s last great adventure is colorfully chronicled in the book “River of Doubt” by Candice Milllard. 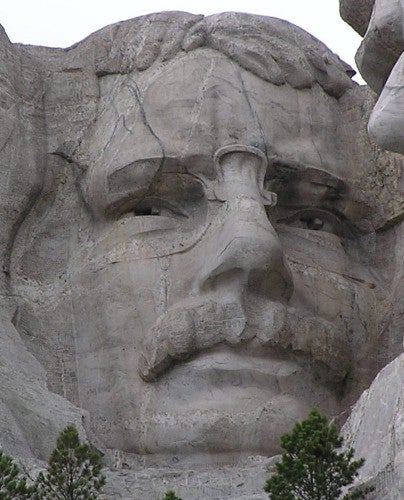 Theodore Roosevelt appears alongside of Washington, Jefferson and Lincoln on Mt. Rushmore.

Roosevelt died peacefully at his home at Oyster Bay, Long Island in 1919. Today, nearly a full century after his passing, he remains larger than life – bold, brash, outspoken, energetic, the very embodiment of the American spirit of grand adventure and the courage to attempt great things. 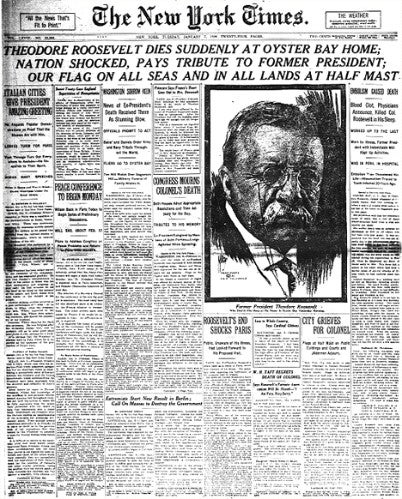 The New York Times reports on Theodore Roosevelt’s passing in 1919. 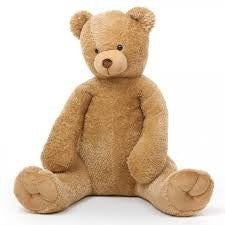 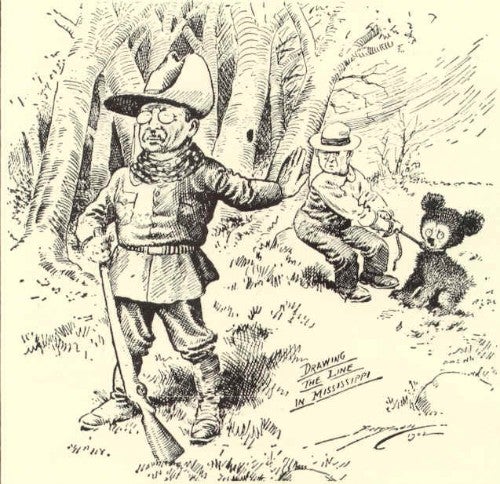 The Origin of the Teddy Bear.

The Teddy Bear is a long-time staple of children’s’ toys. Some will recognize that it was originally named after our 26th President, but few know the full backstory of this wonderfully plush childhood companion for hundreds of millions of children.

President Roosevelt was on a bear-hunting trip to Mississippi in 1902 at the invitation of that state’s governor. While several members of the hunting group had harvested their animals, Roosevelt had yet to take his bear. Several well meaning members of the hunt staff cornered a black bear and tied it to a tree, intending that Roosevelt could finally have his trophy.

Roosevelt, shocked at how unsportsmanlike such an act would be, refused to participate. The President’s response was immortalized in a political cartoon by Clifford Berryman in the Washington Post. In turn, enterprising toymakers around the globe quickly latched on the idea, and the Teddy Bear as we know it today was born.

Article Copyright 2017 by Browning. Photos copyright as noted or in the public domain. Written by Browning staff writer, Scott Engen.