Surpassing 2,000,000 Facebook fans does not happen often. So it is a great accomplishment for all the fans that frequent the Browning Facebook page -- each looking forward to the posts, updates, promotions and the crazy, fun stuff posted on the page. When the page was started over six years ago it had a unique mission posted under “About” on the page, which stated “This is the official Facebook page of the Browning Company. But it is really the official page of Browning fans. This is a place to be with other hunters and shooters who love the Browning brand just like you.”

Over the years Browning has used its Facebook page to assist customers with questions, give valuable updates, announce new products and more. But the most important activity seen on the page has been the interaction between Browning Facebook fans as they helpe each other learn about products, give each other hunting and shooting tips and work tirelessly to clear up confusion that happens so often when you are researching a new purchase.

From our first post (the post shown is one of our earliest and possibly the first) to our most recent, we do our best to give you things you will like, enjoy and share with your family and friends . . . we try to post the kinds of things we share with each other here at Browning. That first post wasn't seen by very many as you can see. Mostly family members of the web team and fellow Browning employees to begin with. With your help the LIKES have grown and grown.

Browning’s Facebook page represents a younger group of Browning customers, so it can be very interesting to see how today’s younger hunters and shooters approach the outdoors. Do you fit into this catagory?

On the Browning Facebook page, under the “Company Overview,” it includes a reference to our founder John Moses Browning. What would he have thought of Facebook? As a young man in the 1860s it would have been impossible to even conceive of something like Facebook, much less understand its profound effect on how people share interests, lifestyles and experiences. Indeed, it has literally changed the way we communicate. But John Browning was a “changer” himself:  his innovations, inventions and design genius changed the hunting and shooting world forever. And it is fair to say, he made key contributions to the cause of freedom across the entire world as well. This is shown in the way that posts about Mr. Browning’s life over the years have been some of the most popular and well “LIKED. 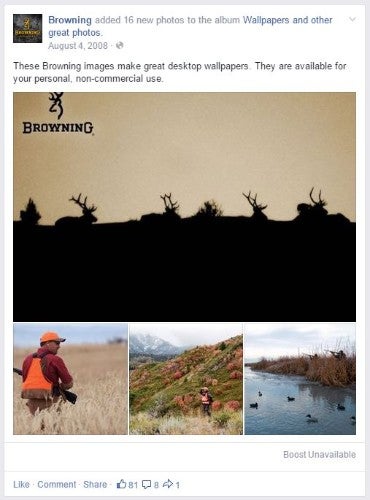 We've come a long way since that first post, with millions of fans enjoying the page today.  This is the actual counter captured in real time as it happened in 2014.

Clearly much of the interest in Browning today is derived from the legacy of John Moses Browning. He used his own love of the outdoors and his keen interest in firearms to create a legendary company that has transcended the generations. Young and old alike understand and embrace this legacy. It would be appropriate to dedicate our Facebook page to him. If we did, we think he would dedicate it right back to all the Facebook fans.

Over 30 years ago the Browning Buckmark logo was created. Today it symbolizes more than just the company called Browning. As it appears on the Browning Facebook page, on the Browning website, on Browning literature and on thousands of Browning products, it represents a mutual love of the outdoors and the outdoor lifestyle. We know it is well loved because it appears on the things you wear and use and make. It represents a common emotion that comes from quality time in the outdoors with family and friends. It represents a sense of excellence and quality. This feeling that surrounds the Buckmark logo has drawn many people to feel part of the Browning family. And, in joining with others who also love the Browning brand, they enjoy being part of a community that is unique in all of the hunting and shooting industry – and perhaps in any industry. They become part of the Browning experience. 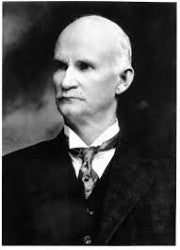 This is the banner that was posted on the Browning Facebook page when Browning reached 2,000,000 Facebook LIKES. Two things made this possible: 1) the Browning brand and its incredible legacy, and 2) people just like you who love the wholesome, family-oriented outdoor lifestyle that the Browning brand represents. Thank you Mr. Browning.