Guadalcanal - America (and Browning) goes on the offensive. 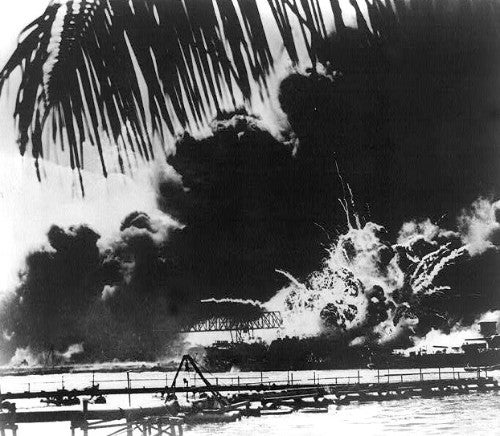 75 years ago this month the US Marines brought the war (and their Brownings) to the Solomons.

After the devastating surprise attack on the US fleet at Pearl Harbor, quickly followed by other attacks on Allied bases throughout the Pacific in early December 1941, America struggled to gather and move the men and resources needed to begin taking back what had been lost. 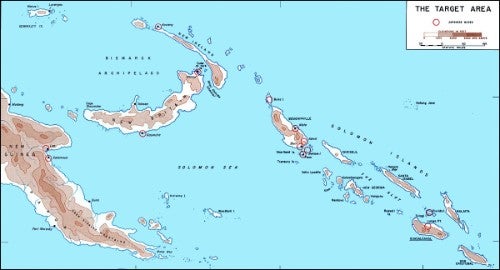 The Doolittle Bombing Raid on the Japanese homeland in mid-April of 1942 was more symbolic in terms of the actual damage inflicted but it proved to be a huge boost to US civilian and military morale. The epic naval and air battle at Midway in early June proved to be something of a zero-sum outcome as the losses of ships on both sides were roughly equal. Japan, however lost many of her most experienced naval aviators, a fact which would figure heavily in their future air operations for the balance of the war.

But it was on a flyspeck of an island in the Solomons in early August 1942 that America would begin the first of many offensive operations that would ultimately win the war in the Pacific three long years later. The island was named Guadalcanal – a name that would forever be linked to desperate combat on land, sea and air, and heroic sacrifices on both sides.

Guadalcanal sits just a few degrees south of the equator and some 2000 miles northeast of Australia. The strategic importance of the island was that long-range land-based aircraft operating from there would be able to control or cut the fragile ocean supply line between the US and Australia. American desperately needed Australia as a rear-area logistic base from which they could project their growing military power across the western Pacific. 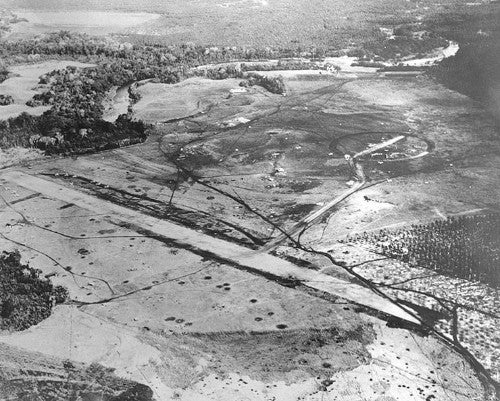 The Japanese built a large airstrip on Guadalcanal flat coastal plain in mid-1942, later to be renamed Henderson Field.

Japan began to occupy Guadalcanal in early June 1942, intent on building a large airstrip on the island’s flat coastal plain. It was a situation that the Americans simply could not allow to continue. 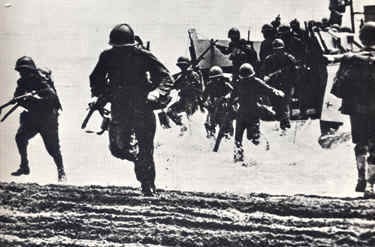 US Marines go ashore on Guadalcanal on August 7, 1942

The First Marine Division, supported by the US Navy, conducted a surprise amphibious landing on the beaches of Guadalcanal on the morning of August 7, 1942. Initial enemy resistance was modest, but quickly increased as the Leatherneck moved inland and dug in. Their first objective was to secure the airfield, which was soon renamed Henderson Field in honor of a US aviator lost in the early days of the battle. 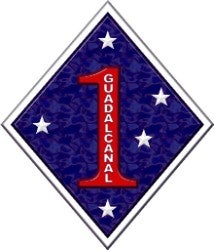 The overall combat situation changed drastically when the US Navy was forced to temporarily withdraw their ships and carrier-based aircraft in the face of an oncoming Japanese naval force. As the Navy quickly disappeared over the horizon, they took with them the Marines’ combat air cover, supporting naval gunfire and, critically, most of their ammo and supplies. (It was this prudent but obviously discouraging withdrawal of carrier air cover by the Navy that has justified the Marines having their own tactical air assets since 1942.) 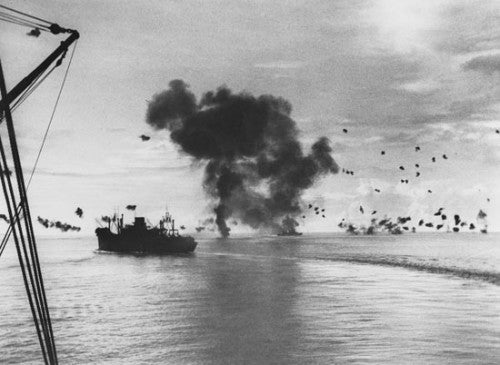 Thousands of lives and scores of ships on both sides were lost in the waters around Guadalcanal.

In the naval battles that would rage in the waters around Guadalcanal in the coming months, thousands of lives and scores of ships on both sides were lost. Names like the Tokyo Express, the Slot and Iron Bottom Sound quickly entered the vocabulary of American soldiers, sailors, airmen and marines.

Part of the crew of one sunken American ship, the USS Northampton, was fortunate to be rescued by a small US Navy PT boat, the 109. Its young skipper hailed from Massachusetts, LTJG John F. Kennedy. Later in the Solomons campaign the PT109 would be rammed and sunk by a Japanese destroyer, marooning Kennedy and his surviving crew on a nearby island until they were rescued. 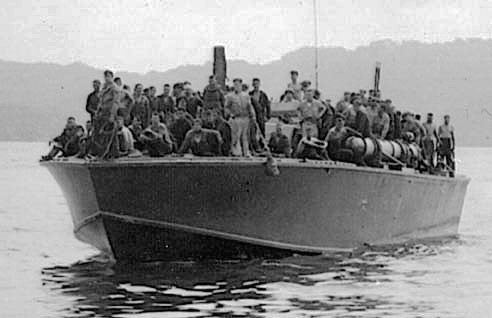 Part of the crew of the USS Northampton was rescued by PT109, commanded by LTJG John F. Kennedy.

On Guadalcanal the Japanese soon began to counter-attack in force, and the Marines dug in to meet their charge. This combat quickly became a desperate slugfest for the Leathernecks, often going hand-to-hand with a determined and capable enemy. 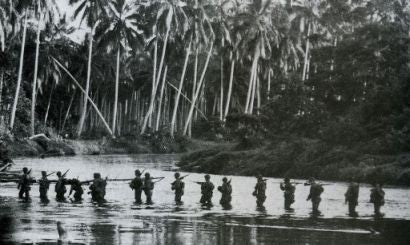 The many episodes of heroism at Guadalcanal are now part of US Marine Corps lore. Larger than life Marine personalities like Chesty Puller, Lou Diamond, and Merritt Edson quickly became household names. The foremost Marine hero of the fierce ground fighting that raged for some six months on Guadalcanal was a scrappy kid from Raritan, New Jersey named Sgt. John “Manila John” Basilone. 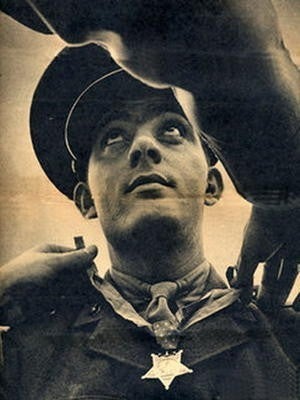 Basilone, serving with the 1st Battalion, 7th Marines, 1st Marine Division near Lunga Point (later to be renamed Henderson Field) was in charge of two sections of .30 caliber water-cooled Browning heavy machine guns. Basilone and his gunners drove off determined attacks by the enemy, during which one of his gun sections was put out of action. 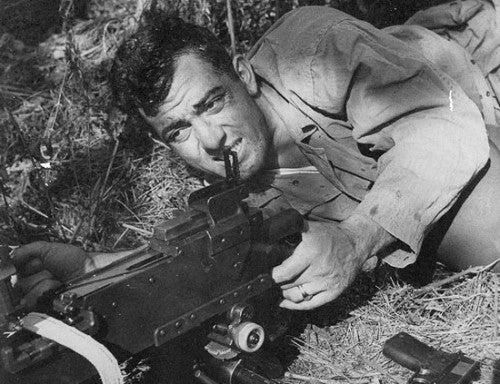 Basilone then brought a spare Browning machine gun into action, repaired another and personally began returning the enemy’s fire until reinforcements arrived. Later, as ammo began to run low, Basilone battled his way through enemy lines carrying as much belted .30 caliber ammo as he could to resupply his gun crews. His actions that night contributed to the virtual annihilation of the attacking enemy regiment. In recognition of his extraordinary efforts, Basilone was awarded the Medal of Honor. 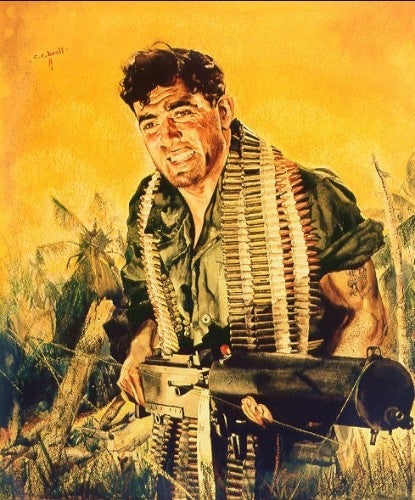 Sgt. Basilone was rotated stateside and was assigned to a national tour selling war bonds. However Basilone’s heart was with his fellow Marines fighting in the Pacific. His repeated requests for a return to combat were rejected, but Basilone was assigned as a machine gunnery instructor at Camp Pendleton, where he trained the next wave of Marines soon to be headed westward. 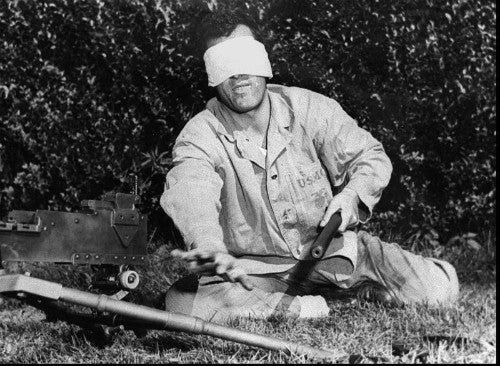 Sgt. John Basilone demonstrates to his students how to change barrels on a Browning machine gun by feel, a critical skill needed during a night firefight.

GySgt Basilone returned to combat in 1945, going ashore on a tiny, sulfurous hellhole called Iwo Jima. There fate finally caught up with John Basilone. An enemy mortar shell landed at his feet, mortally wounding the hero of Guadalcanal. He died in the coarse black sand of Iwo Jima, surrounded by the Marines he loved and served beside. 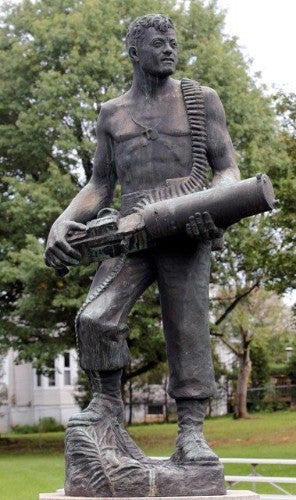 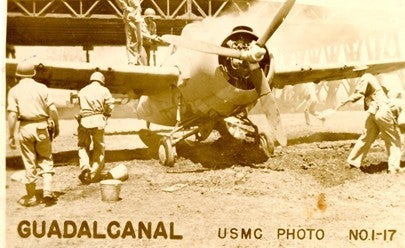 Marines rally to put out the flames on an F4F Wildcat hit by enemy fire a Henderson Field.

Another hero of Guadalcanal was the legendary Marine aviator, Captain Joe Foss. Assigned as XO of VMF-121, Foss was operating from Henderson Field on Guadalcanal (the same mission-critical landing strip that John Basilone was defending with his water-cooled Browning heavy machine gun). The Marine Air Group’s codename at was “Cactus” and thus the “Cactus Air Force” was born.

Flying a Grumman F4F Wildcat fighter fitted with six Browning .50 caliber machine guns, Foss became widely known for his air-to air-gunnery skills. Captain Foss scored his first kill of an enemy Zero on his very first mission aloft over Guadalcanal, and then made a dead-stick, no flaps landing on Henderson Field with a trio of angry Zeros right on his tail. 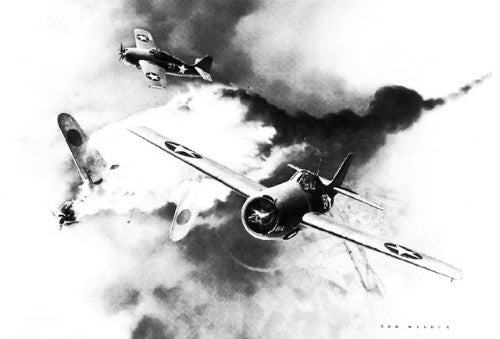 In three months of sustained air combat over Guadalcanal the Marine aviators of “Foss’ Flying Circus” had racked up a total of 72 enemy aircraft, 26 of which fell to the withering fire of Foss’ six heavy Brownings. That score tied him with WWI flying legend Captain Eddie Rickenbacker for the title of “Ace of Aces” and made Foss one of the leading American pilots of WWII.

Foss received the Medal of Honor from President Franklin D. Roosevelt in a White House ceremony on 18 May 1943. Always a shy hero, Foss soon appeared on the cover of LIFE magazine.

The US Marines were relieved in late 1942 by multiple elements of the US Army, and combat operations drew to a close on Guadalcanal in the early spring of 1943.

Ultimately the Japanese had to write off Guadalcanal. They had reportedly lost 20,000 to 30,000 men ashore and countless more at sea. Their combat shipping, pilot and aircraft losses were staggering, and after Guadalcanal, the Empire of Japan had no realistic path to dominance in the Pacific. Their dream of a Greater East Asia Co-Prosperity Sphere was fast becoming a nightmare. 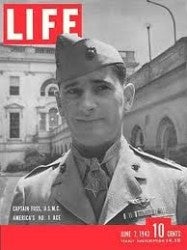 From the American perspective, Guadalcanal was a resounding victory, and the lessons learned there would provide a template for dozens of successful amphibious landings throughout the western Pacific in the months and years ahead.

And it would be the numerous military arms designed by John M. Browning that Americans would depend on in every campaign throughout WWII and beyond.

To learn more about the epic Battle for Guadalcanal, we suggest you explore: 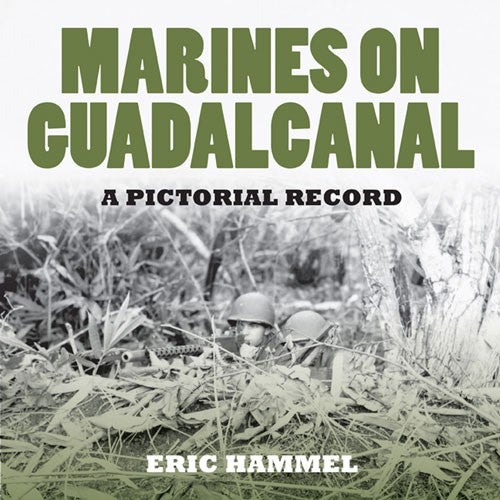 Marines on Guadalcanal by Eric Hammel. 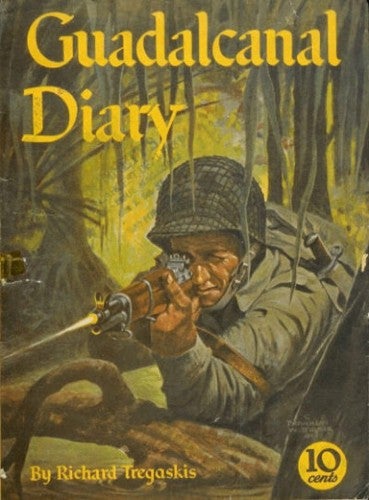