Commemorating the birth of the U.S. Air Force, September 18.

The 18th of September marks the anniversary of the founding of today’s US Air Force. The service branch was created from the US Army Air Forces in 1947 as part of that year’s National Security Act to reorganize the defense and intelligence assets of the United States following WWII.

But the history of US military aviation, and of the role that John M. Browning’s firearm designs played in virtually every conflict of the 20th and 21st century makes for some colorful and interesting reading. Let’s take off and see what awaits us in the Wild Blue Yonder.

Military aviation in the United States, using heavier-than-air powered aircraft began soon after the Wright Brothers first flight in 1903. In 1909 the US Army formed the Aeronautical Section of the Signal Corps. The US Navy followed suit shortly thereafter.

Early military aircraft were flimsy, underpowered wood and fabric contraptions that often struggled to remain aloft. With severe weight restrictions, the aircraft’s armament often consisted of just the pilot’s sidearm. To prevent damage to their aircraft’s fragile fabric surfaces, some early aviators were issued the John M. Browning-designed 1911 .45 automatic pistol fitted with a wire cage to catch the empty cases as they were ejected from the gun. 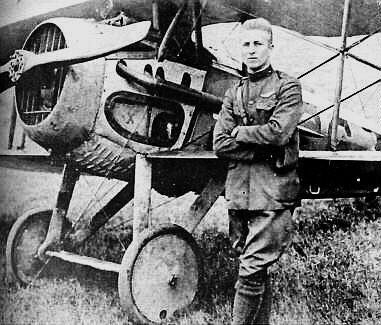 WWI American ace Lt. Frank Luke, “The Arizona Balloon Buster” poses with his SPAD fighter. Luke won the Medal of Honor in part for using his 1911 .45 pistol to avoid capture by a squad of advancing Germans after being shot down. Lt. Luke was killed in the resulting firefight. Luke AFB in Arizona is named in his memory. USAF News photo.

Technological improvements during the WWI era enabled aircraft to carry fixed, forward firing machine guns operated by the pilot in fighters (they were called pursuit planes way back then) and in flexible mounts that could be aimed by a gunner on larger aircraft. Because weight remained a limiting factor, most of these guns were lighter air-cooled versions of the standard .30 caliber infantry machine guns. It was during this period that John M. Browning designed two of his most famous military inventions, the .30 caliber and .50 caliber Browning machine guns for the US Military.

In the post-WWI era aircraft became faster, more powerful and better armored. In his outstanding multi-part history of Browning Aircraft Machine Guns as published on the Small Arms Review website, historian Frank Iannamico notes, “In the years following World War I, the .50 Browning machine gun slowly began to surpass the smaller caliber .30 guns in military aircraft applications. The proposed change from the .30 to the .50 Browning initially met resistance by Army Air Service pilots who preferred the much faster firing .30 caliber guns when aircraft were not armor protected prior to World War II.”

“The .30 caliber’s muzzle velocity was low, and its projectile too light, notes Iannamico. “During World War II, the U.S. Navy and Marine aviators who encountered the lightly constructed Japanese aircraft in the Pacific Theater relied on the .30 caliber guns for a longer period than their Army Air Corps counterparts in Europe.” 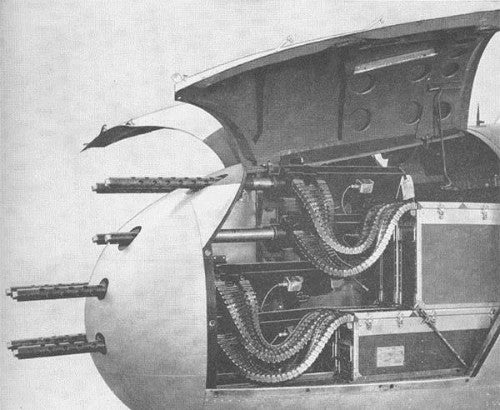 The first rule of air combat is to bring enough guns. The nose of this WWII era attack aircraft is fitted with eight forward-firing .50 caliber Brownings. Photo from Col. George Chinn’s series on The Machine Gun.

Lighter and faster. The ongoing effort to make the basic .50 caliber Browning machine gun platform lighter, faster firing and more versatile for combat aircraft applications involved many players, including Colt, High Standard, Frigidaire and Springfield Armory. Rate of fire was becoming increasingly important as aircraft speeds increased, especially when strafing ground and surface targets. The faster the plane goes, the less time it spends over the strafing target and thus the fewer bullets impact a given area. 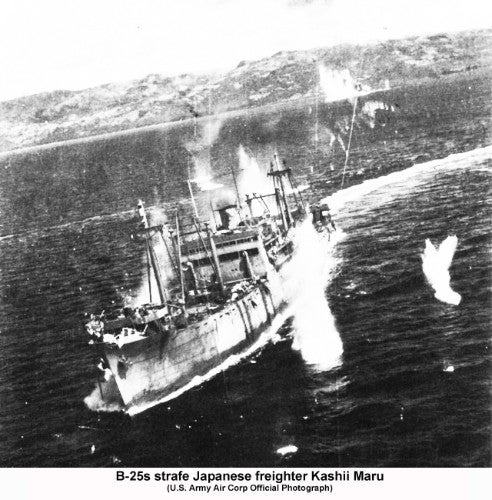 Fourteen Brownings per bomber. “The most prolific use of the Browning machine gun during World War II was the .50 caliber guns used in aircraft applications,” Iannamico explained. “There were as many as fourteen .50 caliber machine  guns fitted to U.S. bombers.”

The guns were used for defending the bombers against enemy fighter aircraft attempting to shoot them down,” Iannamico continues. “Tactical formations of bombers were established, positioning each of the aircraft in such a manner that they could defend each other. This was especially important early in the war when U.S. fighter escorts did not have the range to accompany the bombers to the target.” 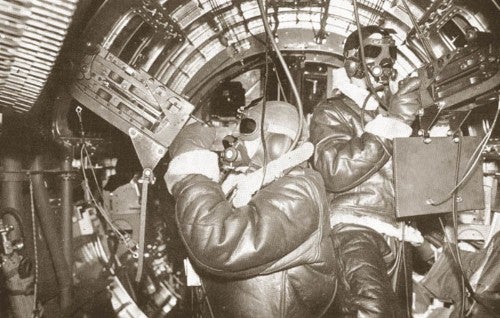 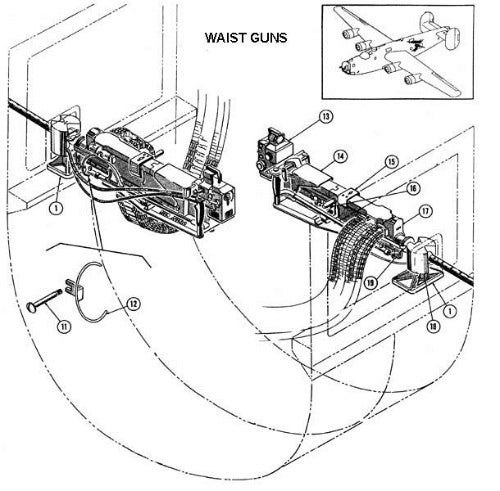 WWI American ace Lt. Frank Luke, “The Arizona Balloon Buster” poses with his SPAD fighter. Luke won the Medal of Honor in part for using his 1911 .45 pistol to avoid capture by a squad of advancing Germans after being shot down. Lt. Luke was killed in the resulting firefight. Luke AFB in Arizona is named in his memory. USAF News photo.

You can see US B 17 bombers and their crews in combat action at https://www.youtube.com/watch?v=bi4jL6NVXeM

The Jet Age. As WWII drew to a close and the jet age was born, some thought the day of the machine gun-equipped fighter was over. That theory was quickly disproven as the Korean War kicked off in 1950. Browning .50 caliber machine guns, often a full half-dozen forward firing units mounted in jet fighters like the F80 Shooting Star and F86 Sabre gave a good account of themselves against the enemy in air-to-air combat in “MIG Alley” high above the Yalu River. 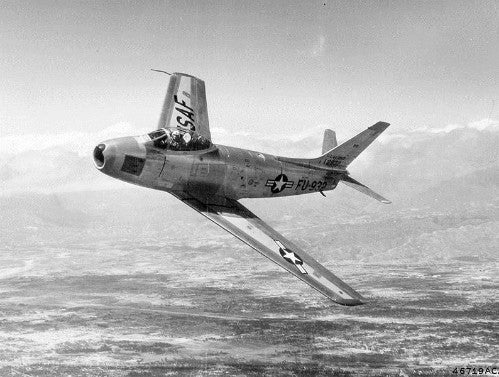 A USAF F86 Sabre banks to show three of its six Browning .50 caliber machine gun ports in the dark square on the side the fuselage, just forward of the cockpit. WikiCommons photo.

The ground support role. As military aircraft entered the supersonic realm, even multiple-mounted single barrel machine guns were not able to deliver the rate of fire needed to saturate a fast moving or fast passing target. Military designers soon began to bring a century-old weapon design into the jet age – the multi-barrel Gatling gun.

But the single barrel .50 caliber Browning machine gun platform was far from obsolete for combat aircraft. Supersonic jets, with their sheer speed and massive fuel consumption made them less than ideal for the ground support role. This created new combat roles for traditional propeller-driven aircraft, and for another modern aviation platform, the helicopter. Countless numbers of American ground troops owe their lives to the supporting fire laid down by Browning machine guns mounted in these classic aircraft. 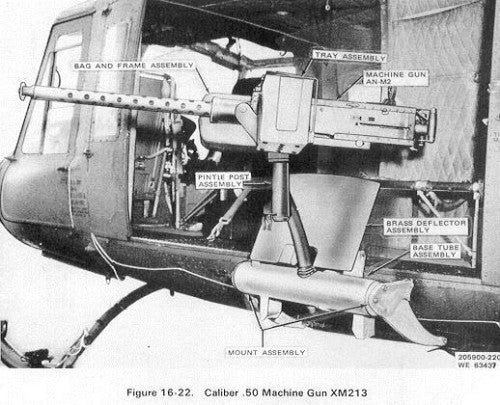 Still on the front line. One might think that today, nearly a century after its initial introduction, the .50 caliber Browning, like the Model T and the wood and fabric biplane would be found on the scrapheap of history. Nothing could be further from the truth. The .50 caliber Browning is still the go-to heavy machine gun for every branch of the US Military.

The Browning .50 caliber machine gun still serves with frontline military aviation units as the M3M, also known as the GAU-21. Made by FN, Browning’s parent company, the M3M fires from an open-bolt to increase rate of fire to 1,100 rounds per minute and to improve cooling. It is the standard helicopter heavy machine gun for many branches of the US Armed Services, and is also used on armored vehicles and surface combat ships. In fact the .50 caliber Browning machine gun is one of the longest-lived weapons in the US Military inventory, and it’s expected to serve for many years to come. 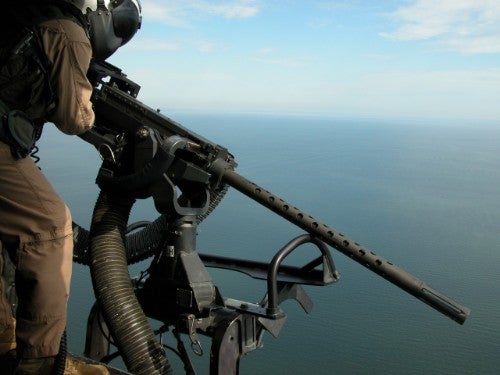 For all those who have served and continue to serve out there in the Wild Blue Yonder, we at Browning offer our heartfelt thanks for helping to keep America safe and free.

Watch the GAU-21 in action at https://www.youtube.com/watch?v=G2SIbXksH_U

READ A COMPLETE HISTORY ON THE AIR FORCE WEBSITE. 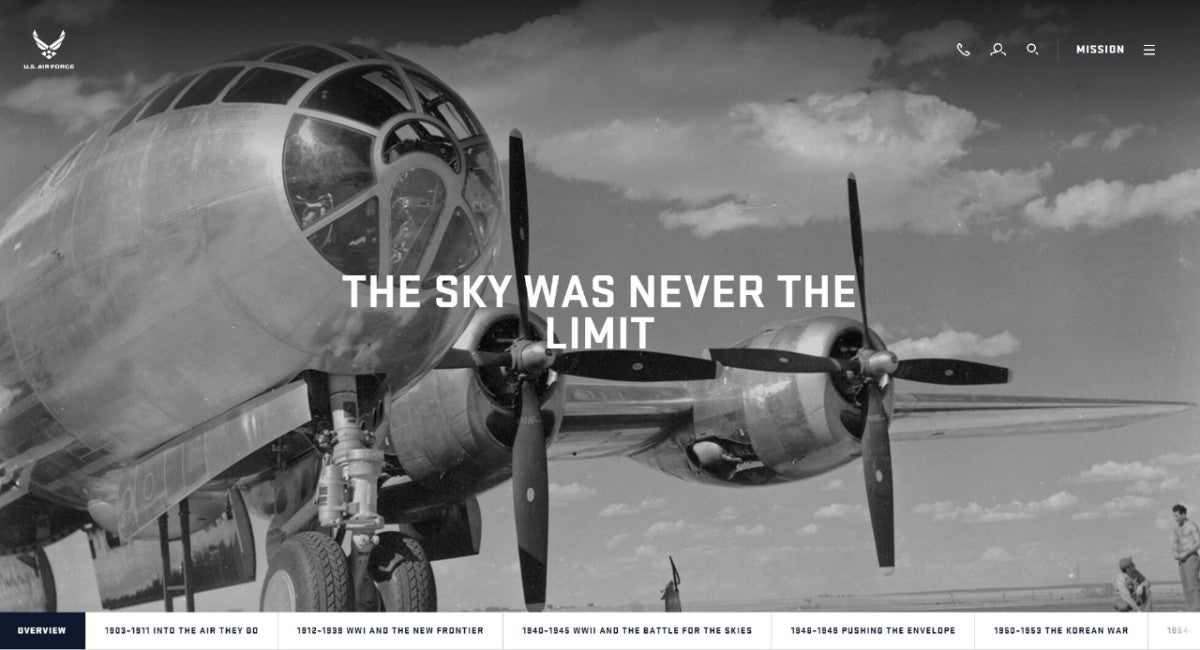 We make every effort to assure that images used in articles are in the public domain or used with permission. This article is copyright Browning September 2016. The article was written by Browning staff writer Scott Engen. This article represents a brief historical overview from the perspective of honoring John Moses Browning, the great firearms inventor. Mr. Engen is one of our in-house historical experts . . .  Browning always works hard to be historically accurate on all articles. Of course, we appreciate any historical corrections or insights to articles such as this from historians.