The history of the outdoor industry's most iconic logo.

The Origin of the Browning Buckmark logo.

The Browning Buckmark is an integral part of the Browning brand. Over the years it has become deeply rooted in Browning culture, being displayed not only on Browning products, but by Browning enthusiasts on trucks, equipment, ATVs, airplanes – just about any place you can think of – as a personal show of brand loyalty. In recent years it has gone beyond Browning itself to represent an authentic "outdoor lifestyle" embraced by millions of people in North America and around the world. But it wasn’t always that way. In the history of Browning, the Buckmark is a fairly recent addition.

The Buckmark logo was designed in the fall of 1977 by Browning's advertising art director Don Bailey and was introduced in Browning literature and advertising as quickly as possible to be part of the 1978 Browning Centennial celebration.

For the first hundred years Browning was identified by the vintage Browning logotype. The beginning of the second 100 years was started with the introduction of the Buckmark logo . . . the now legendary symbol for the past 40 years. We are sure you'll be seeing it around another 60 years and beyond. 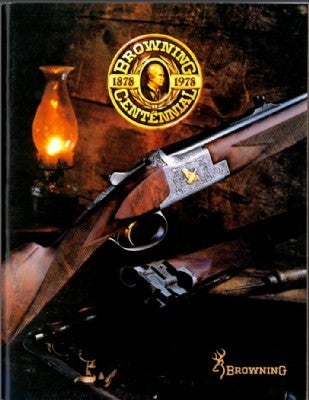 Shown above is the cover of the 1978 Browning Centennial Catalog which showed the Browning Buckmark logo to the public for the first time.

A little background is necessary to put this project and its timing into context. In those years, the Browning annual sales meeting was usually held in the month of July. Harmon Williams, then the president of Browning, felt that this was a relatively slow sales period of the year and, therefore, the best time of the year to bring the field salesmen into the offices. Since the late 1960s, Browning had been trying to break into non-gun markets with fishing, archery, boots, clothing, and knives. The objective was to insulate the company from the increasing threats of firearms legislation. Success with non-gun products was generally lukewarm, with boots and archery initially being the most successful.

Browning creates an in-house ad department for the first time.

The clothing line was very small in 1977, and the pressure was on to expand its acceptance. Invariably, whenever the clothing discussion came up, the salesmen always pointed to the example of the Izod shirt, which was a hallmark in those days. They attributed the Izod success to the appeal of the little alligator insignia embroidered on the pocket or just above the pocket. Browning needed an appealing insignia like this, they argued. By this time the issue had become a constant, almost nagging theme at the sales meetings for several years.

Immediately, after the 1977 sales meeting, Vern Peterson, Browning marketing manager, (second in command under Williams) gave the in-house agency its first project – come up with an insignia to embroider on Browning clothing. (The second project received was to produce the 1978 Browning Centennial catalog.)

There was no thought at the beginning of the project that it would include a Browning logo redesign, but very soon Bailey realized that the acceptance of the insignia required a strong association to the Browning brand in order to be able to stand alone on the breast of a Browning garment as Browning identification. Bailey felt this was an opportunity to advance the traditional Browning logo to a more contemporary design.

The design Bailey recommended was an abstract mule deer depiction, soon to be known as the Buckmark, the name it still bears today.

At the time he designed the logo Bailey felt that large mule deer had a mystique that no other big game animal possessed. He recalls that elk were not yet as common throughout the West as they are now. Mule deer were classic to Utah and big mule deer bucks were universally accepted as a symbol of the hunt. When designing the Buckmark, Bailey envisioned “a huge mossback buck walking away from the hunter and then, as they often do, taking one last look over his shoulder.” The perspective of the viewer is from slightly below the deer, which is a subtle effect you can see with careful examination of the logo.

Initially, Williams was not enthused with the Buckmark logo. His objection was that first of all, it was a hunting symbol, and Browning was trying to expand into some non-hunting outdoor sports (fishing and camping). Secondly, the mule deer was not the most popular big game animal; the whitetail deer had that distinction.

“I really like the doe in the Buckmark, and consider it a happy accident.”

However, this was one of the very rare instances where those involved in the project, including Peterson and David Zeigler, Browning advertising manager, were able to convince Williams to change his mind. The argument was that this was an abstract symbol of the outdoors in general (fishermen and campers thrill to seeing deer as much as hunters do), and importantly, the mule deer is a western symbol that reinforces the western origins of the Browning company as opposed to a firearms companies largely located in New England’s “Gun Valley.” (This was a somewhat weak, hopeful argument to put before to the brutal marketing scrutiny of Williams, and to this day, those involved are surprised it succeeded.)

When approval was given, a strategy to utilize the Buckmark both as a stand-alone symbol and as part of the traditional Browning word logo was adopted. The Browning Buckmark first appeared as an element of the Browning logo on the cover of the 1978 Centennial catalog. The Centennial catalog was printed in December 1977 and released at the Shooting Hunting and Outdoor Trade show (SHOT) in January 1978. As a separate element (that is, not incorporated in the word logo), it also appeared in the 1978 catalog as a small “punctuation element” at the end of major text breaks.

Bailey remembers that a short time after the approval of the logo a fellow Browning employee commented on how much he liked the logo and how interesting he found the image of the doe within Buckmark. Bailey responded, “What doe?” Somewhat confused, he didn’t push the issue. He went back to his office and studied the logo for some time before the reverse image of the doe finally appeared to him as well. According to Bailey, “I really like the doe in the Buckmark, and consider it a happy accident.”

This closeup of the Browning full "signature," with both Buckmark and logotype, is taken from the cover of the 1978 Browning Centennial catalog.

Between the initial design developed for the presentation to Williams and the completion of 1978 print ads using the Buckmark there were several minor refinements of the Buckmark logo. Bailey was not totally satisfied with the first version used to gain the approval, and at least two more versions were produced in following weeks before the final version was formalized. Bailey pointed out that the first version was “too spindly when reduced to small sizes” so more thickness was added to the final version. For the same reason, Bailey also closed the gap between the ear and the base of the antler. The 1978 catalog and price lists use the second version. Two very early ads -- one for boots and one for clothing -- used the original Buckmark. By the time advertisements ran later in the spring of 1978, the final, third version was used. Contrary to the original assignment, Bailey immediately incorporated the Buckmark logo with the “Browning” word logo as a combined logo with the Buckmark on the left, next to the “B” in Browning.

None of the initial usages carried the registration mark (®). In fact, it was quite a few years before the word logo with Buckmark and the Buckmark alone were formally registered. Both elements eventually were registered but not simultaneously. The reason for this delay was lack of urgency, despite Bailey’s almost paranoid insistence that it was critical to register the mark. He was proven right, of course, and ultimately his wish prevailed.

As an application on a product, the Browning Buckmark first appeared on Browning clothing (primarily coats and vests) in the 1979 clothing line. Not all clothing products carried it initially, because of carryover inventories, but ultimately it was phased into all product packaging and instruction elements as well as all Browning printed materials, advertising, sales literature, etc.

Shown above is the original Buckmark as first used in 1978 in the catalog, price lists and several ads.

Bailey began subtle revisions to the Buckmark soon after the approval. The final version, which appeared a bit later in 1978, is shown above.

Over four decades after its first use, the Buckmark has become synonymous with the Browning brand. It is now a modern icon of quality, innovation, and love of the outdoors. It is displayed with pride by millions of hunters, shooters and outdoorsmen – including men, women, and children. You can own a Buckmark sticker in black, camouflage, stars and stripes and even pink. The popularity of the “Show Us Your Buckmark” contest is the ultimate confirmation of the worldwide devotion to the Buckmark. 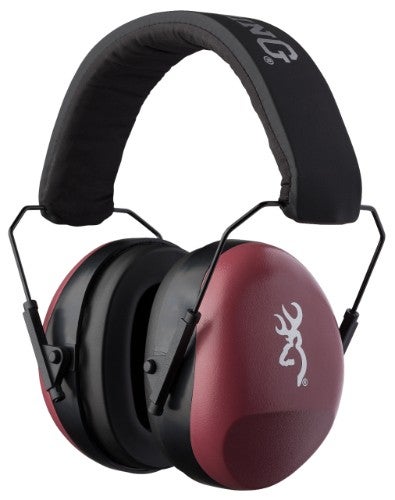 Identifying a Browning on a store's gun rack has been easy for decades, with the gold Buckmark logo on the trigger guard. 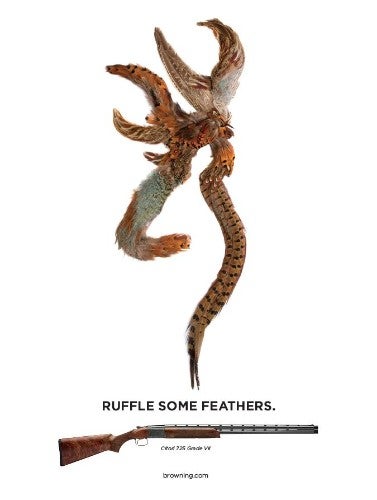 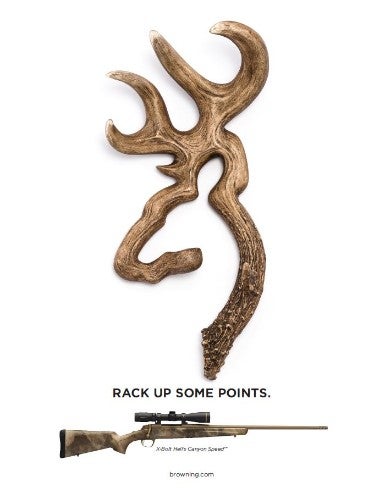 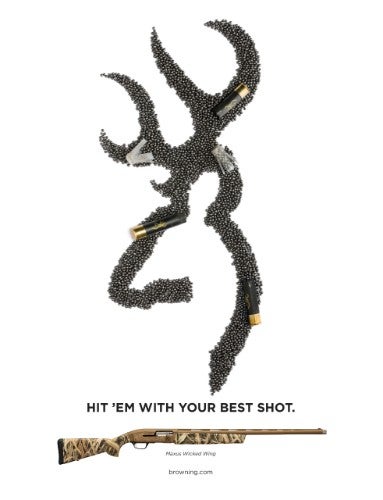 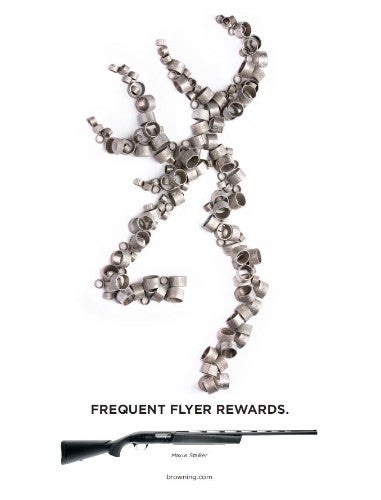 David Zeigler and Don Bailey generously contributed to this story. Zeigler was the Browning advertising manager in 1977 at the time the Buckmark was created. He retired in 2000 as Browning’s vice president of advertising. Don Bailey, the designer of the Buckmark logo, has had an extensive advertising career since leaving Browning in 1983. 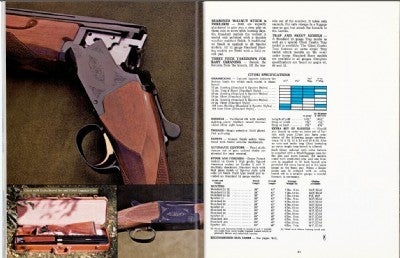 In the lower right of this Citori shotgun spread, in the 1978 Browning Centennial catalog, the Browning Buckmark is used as a stand-alone element. In this case it is used to indicate the end of a product section. 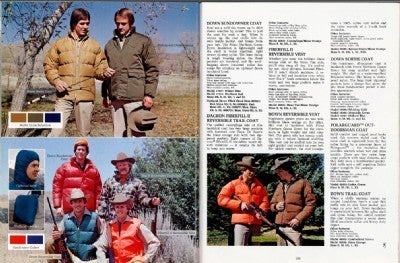 This clothing page from the 1978 Centennial catalog also shows the use of the Buckmark at the end of the section, in the lower right corner. 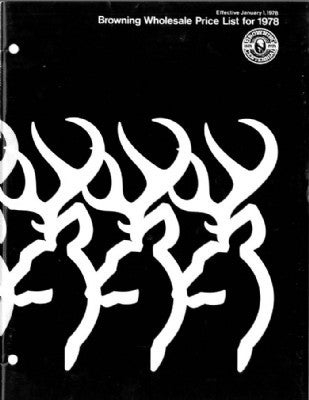 The 1978 Browning Wholesale Price List has a printing date of November 1977, one month before the Browning Centennial catalog was printed. It is assumed that this was the first piece of official literature printed using the Buckmark.

Few entries in the Show Us Your Buckmark contest have shown a love of the Buckmark logo more than John Dahl's winning idea in 2012.

Copyright Browning, 2008,. Revised, Roger Stitt, April 2015, 2018, 2019. May not be reproduced or copied in any way without specific written permission of Browning. Reprinting or posting by any site (specifically by content scrapers) is forbidden. Usage is only allowed for quotes and excerpts used for historical and/or news articles.