Celebrating 40 years of the Browning BPS. 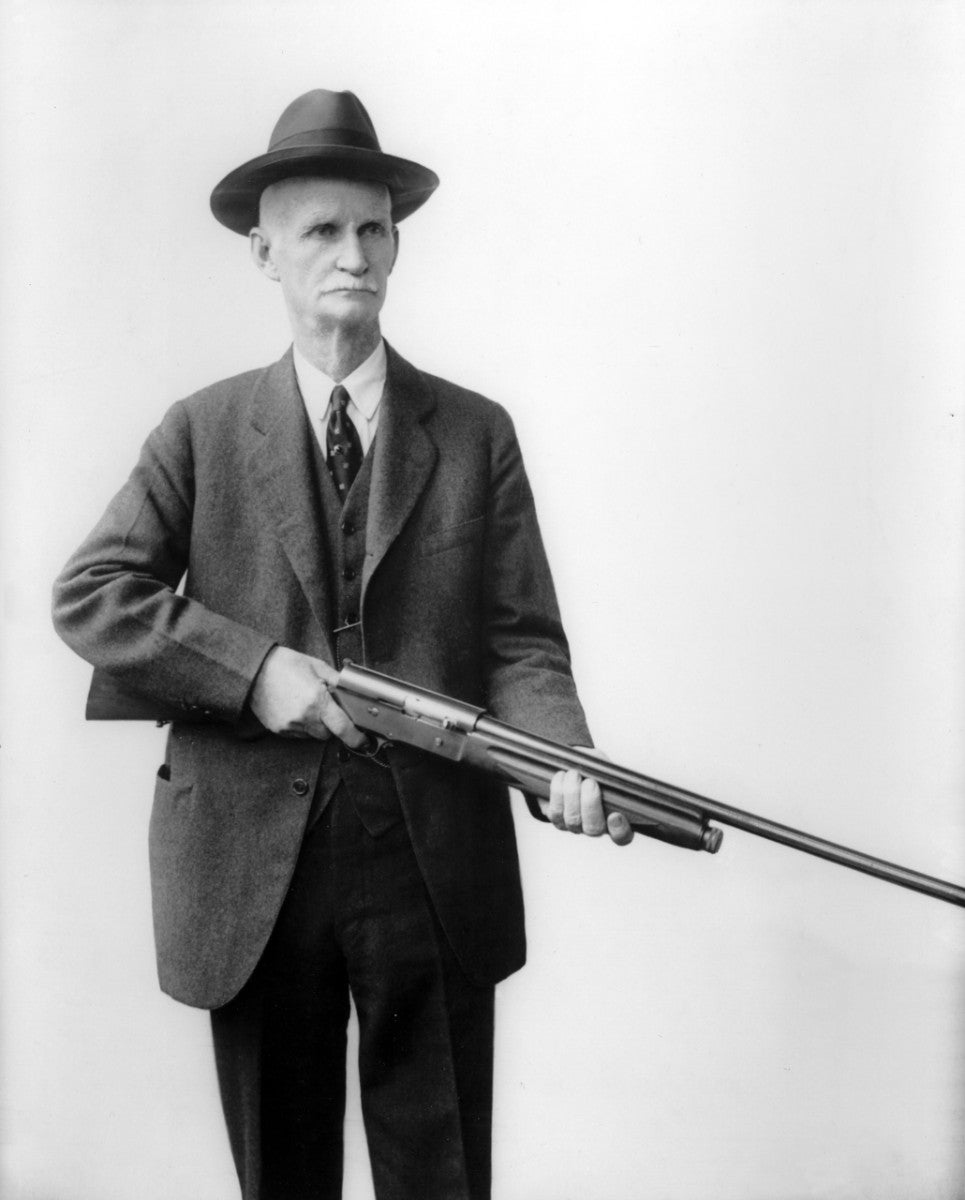 John Moses Browning shown holding his Automatic 5 shotgun. By the time he invented the Auto 5 he had several successful pump action shotguns under his belt.

The name John M. Browning is forever linked with the autoloading shotgun. And well it should be, as his legendary designs like the Auto-5 revolutionized the way the world looks at and uses repeating smoothbores.

What is less well known is the fact that John M. Browning also designed several classic pump action shotguns that, in turn, changed the way tens of millions of shotgunners went after waterfowl, upland birds and elusive clay targets.

The 1893 Winchester was designed by John Browning and had revolutionary features, styling and handling. It was the first successful pump action shotgun in the world. Image: Winchester Collector's Association archive.

Why are model 1893s so rare? The reason is one of the great stories of the rapidly evolving 19th Century gun industry. John Browning designed the 1893 for black powder only and for a maximum shell length of 2 5/8". Within just a few years of first production, longer shells loaded with smokeless powder became very popular. Winchester responded by having John Browning upgrade the design for the new longer shells and smokeless powder pressures. This, combined with new manufacturing techniques, created a vastly superior shotgun. With concern that its customers would shoot longer, smokeless loads in their 1893s (which was potentially dangerous), Winchester made an extraordinary offer to owners of 1893 shotguns: they could exchange their 1893 shotguns for a new Winchester Model 1897. This was received well. Unfortunately, most of the exchanged Model 1893s were destroyed by the factory, and that is why they are so hard to find.

One of the first pumps John M. Browning designed was the Winchester Model 1893. While rugged and reliable, it was designed to handle the modest pressures produced by the black-powder shotshells of that era. In the later part of the 1890s smokeless propellants, with their higher chamber pressures, began to replace traditional black powder loads. Winchester again turned to Mr. Browning, their firearm design wizard to create a pump gun optimized for these modern shells.

The result was the legendary Winchester Model 1897 pump. It had a rugged steel receiver, an exposed hammer, right side ejection port and loaded its tubular magazine via a bottom port. The Model 1897 remained in production until 1957 and became one of the most popular shotguns of the pre-WWII era, with more than 1.2 million guns rolling off the Winchester assembly lines.

The 1897 Winchester pump was made for smokeless powder and become one of the most popular and appreciated shotguns of its day. 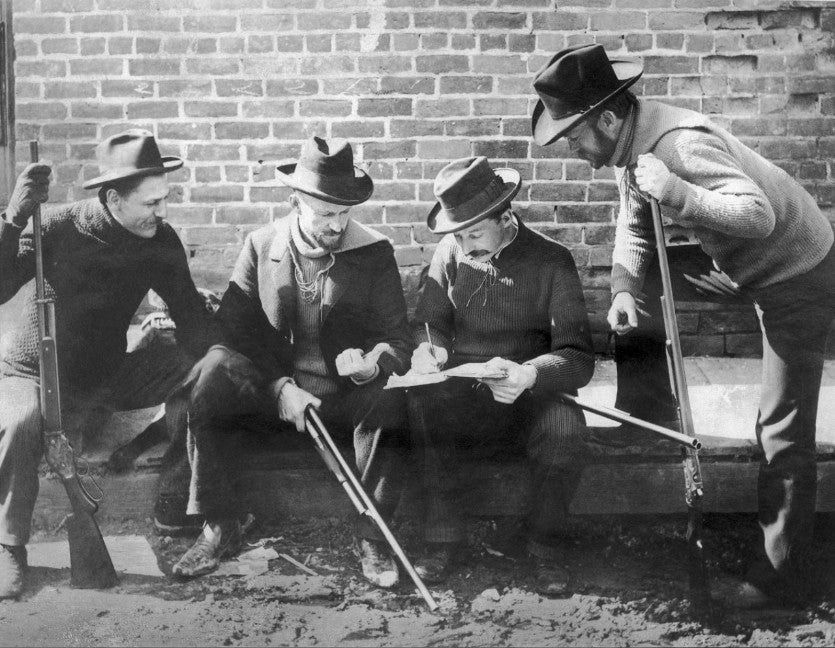 John Browning, seated second from left, as a member of the nationally-ranked 4B’s trapshooting team.

But John M. Browning was not done trying to perfect the pump shotgun - not by a long shot. As an avid bird hunter and a nationally-ranked trapshooter, Mr. Browning knew first-hand exactly what features the perfect pump needed to have.

For a detailed history of the development of the Model 1893 and 1897 shotguns watch the Forgotten Guns video featured on the Rock Island Auction website and on their YouTube Channel. WATCH HERE.

In this close-up of one of the shotguns used by a member of the 4B's trap team, you can see the distinctive receiver top of the Winchester Model 1893.

John Moses Browning designed or contributed key design featuers for a number of well-known pump action shotguns marketed by other companies. For example:

Like the BPS, the John Browning-designed Ithaca 37 was bottom ejection with no side ejection port. This was a WWII military version. Photo from NRA/American Rifleman archives. 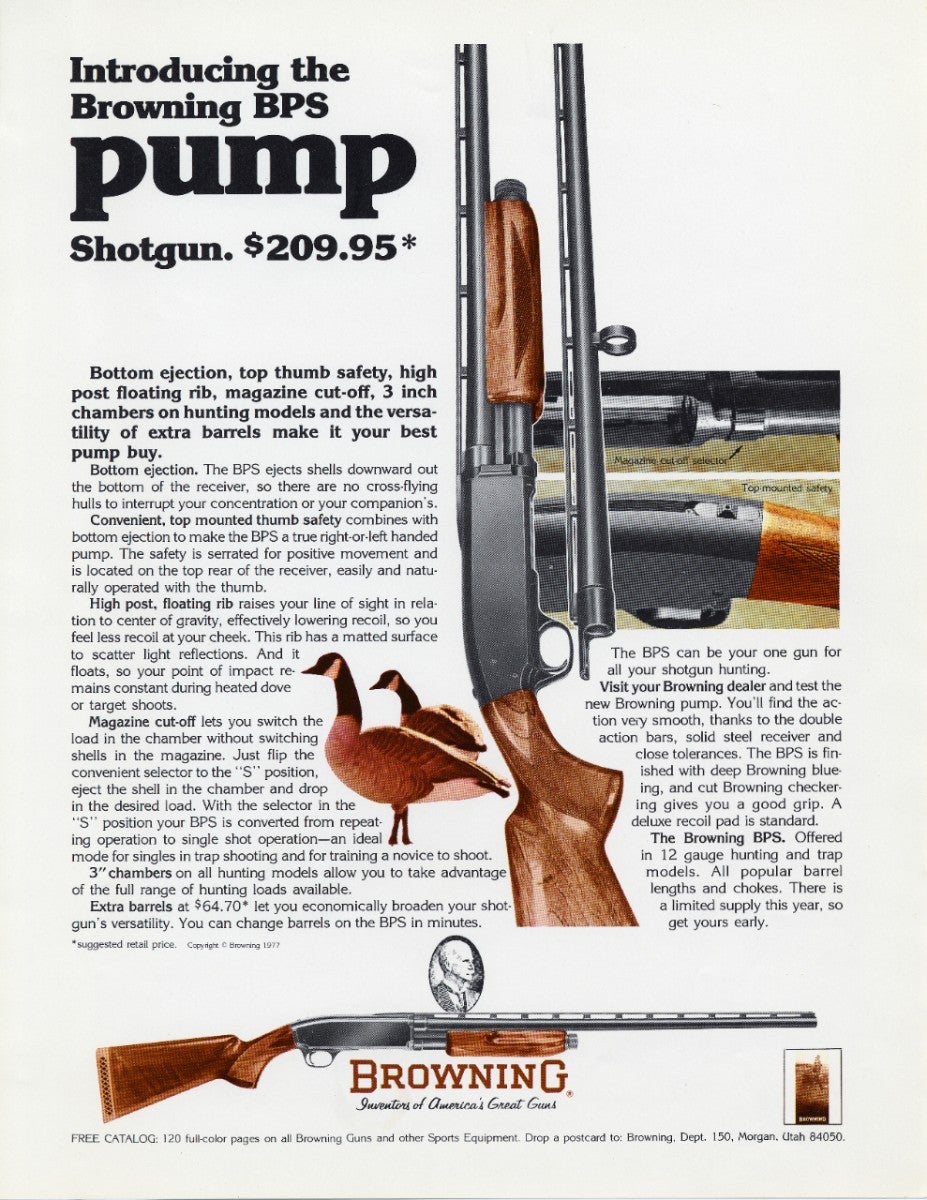 A lot has changed since this vintage 1977 introductory advertisement ran (like the price). But the quality, handling and durable performance of the BPS is still the same. 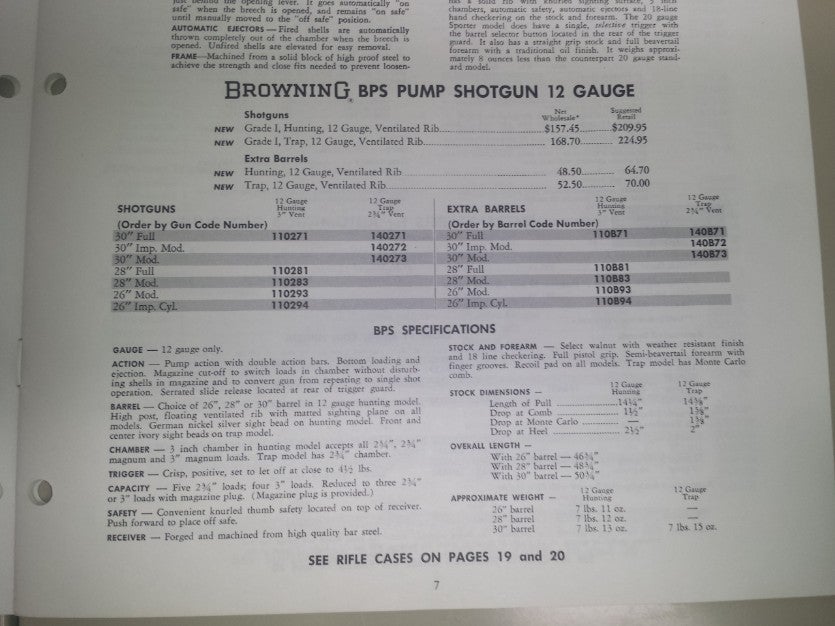 The 1977 price list shows the new BPS to customers for the first time. This is a wholesale price list that only went to dealers and wholesales. $209.95 suggested retail. Don't you wish you could get one for that price today?

Browning liked the idea of a pump shotgun that both loaded and ejected from the bottom of the receiver. This allowed fired shells to drop straight downward, out of the shooters line of sight, which helped minimize visual distractions for the shooter when following a fleeting target.

This also made the bottom ejecting pump the ideal repeating shotgun for both right- and left-handed shooters. These innovations were incorporated in Mr. Browning’s design of the Model 31 for Remington, and as his design concept evolved, they were also used in the famous Ithaca Model 37.

Fast forward to 1977. The firearm company that John M. Browning started back in 1878 wanted to introduce a thoroughly modern pump action that incorporated the very best of the founder’s innovations. The result was the now-famous Browning Pump Shotgun, which is better known as the BPS. 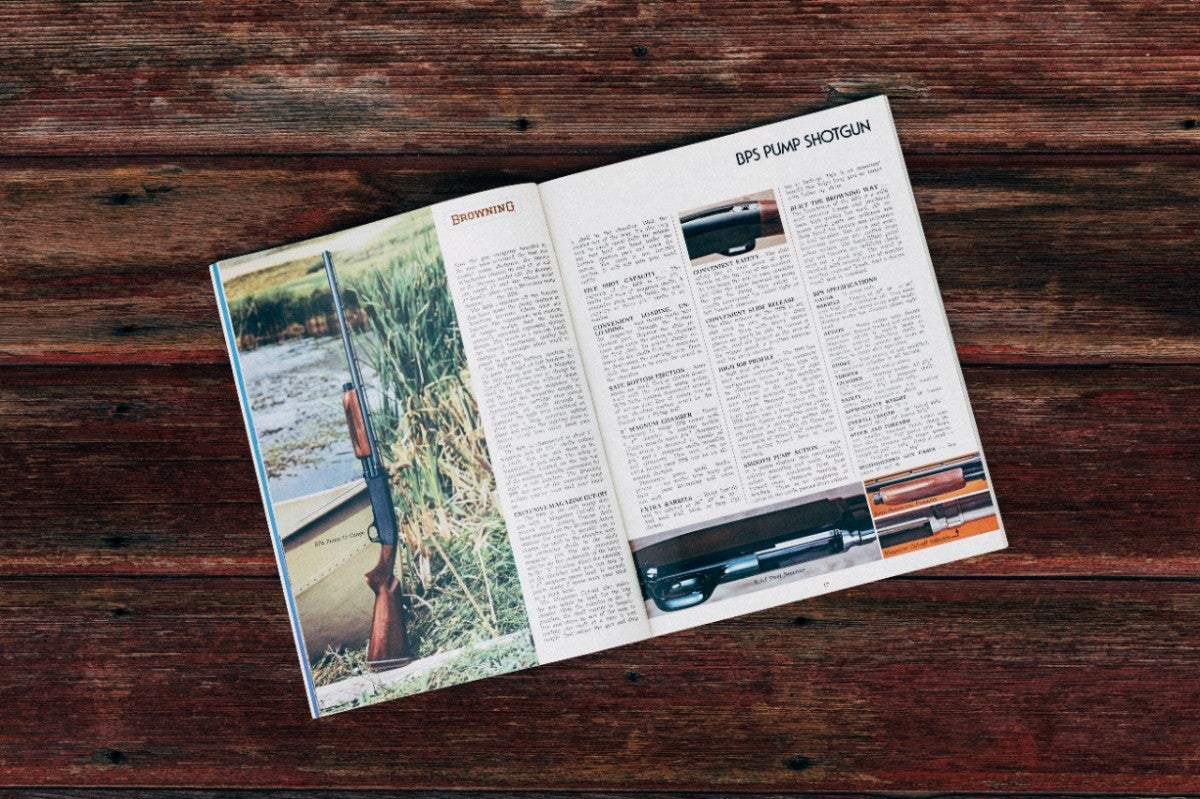 This is the 1977 catalog with the first mention of the new BPS. In what may have been an oversight, a banner or bug indicating the BPS as "New" is found nowhere on the catalog pages.

True to John M. Browning’s original pump-gun vision, the modern BPS has a rugged steel receiver and both loads and ejects from the bottom port. To make it even more adaptable for both righties and lefties, the thumb safety is mounted within easy reach on the upper rear of the receiver.

Twin action bars (one on each side) for superior strength and reliability. The idea of twin action bars proved the right one, now that longevity and smoothness are hallmarks of the BPS design. 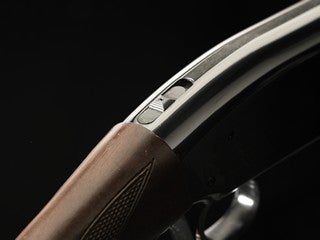 Top tang, thumb-operated, ambidextrous safety. We often call it a top tang safety even though the BPS really has no tang. It has a rugged, single surface receiver to stock attachment. But the safety is up where a tang would normally be. 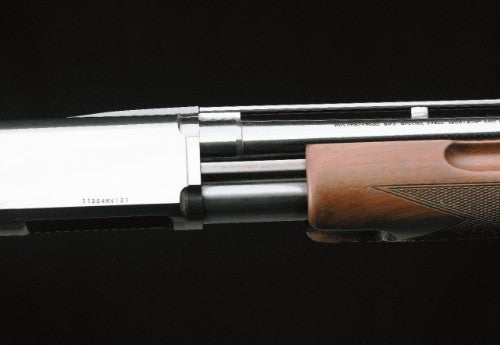 Steel components throughout. Steel action bars. Clearly the most rugged pump action shotgun you can buy. 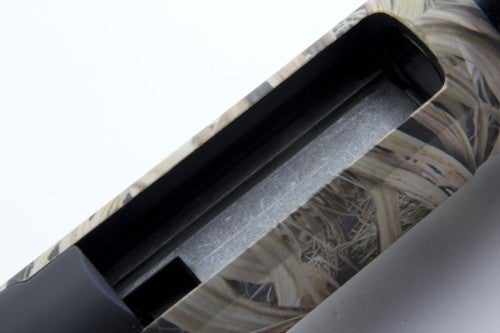 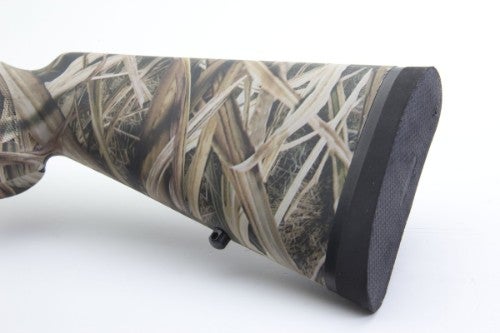 The BPS has adapted well to today's shooters with a full complement of camo patterns and with the addition of modern shooter features. 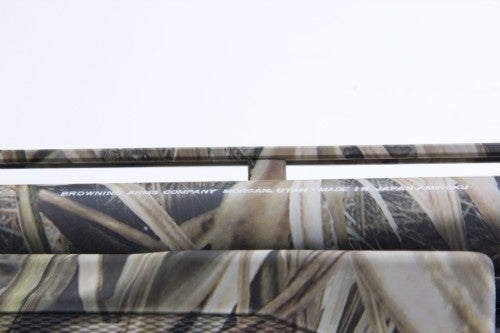 Floating rib. This type of rib keeps point of aim more consistent no matter how hot your barrel might get from extensive shooting. Floating means it can move in relation to the rib post. This is an excellent design, not common on lesser pump shotguns.

The BPS also sports dual steel action bars for reliable operation. From muzzle to buttplate the BPS exudes that legendary quality that has been a hallmark of the Browning brand for well over 100 years.

But please don’t just take our word for it. Check out the full line of BPS shotguns for yourself.

Even better, stop by your local Browning retailer today and ask to handle the BPS. Feel the heft and listen to its solid lockup of precision-machined steel on steel. Let the BPS float to your shoulder. Sight down the barrel and imagine a trio of distant ducks falling with a splash, or clay targets turning into ink blots against a crisp blue summer sky.

Once you do that, you’ll never be satisfied shooting anything less than a real Browning Pump Shotgun. On that point you can take us at our word.

You can gauge its success by the number of gauges it comes in.

The  BPS is available in the full range of gauges: 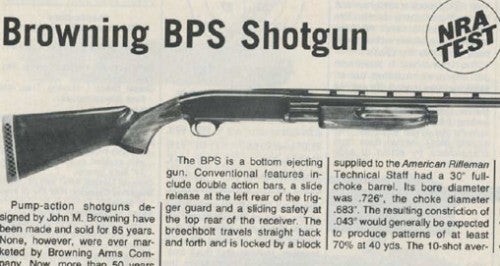 This page was clipped from the original Amiercan Rifleman article written at the introduction of the BPS in 1977.

See what the NRA’s technical editors said about the new BPS. (published in 1978). READ THE ORIGINAL STORY. 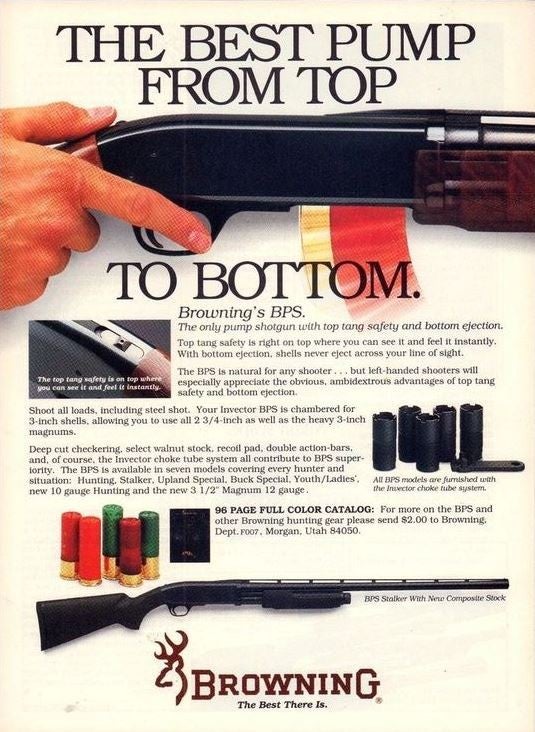 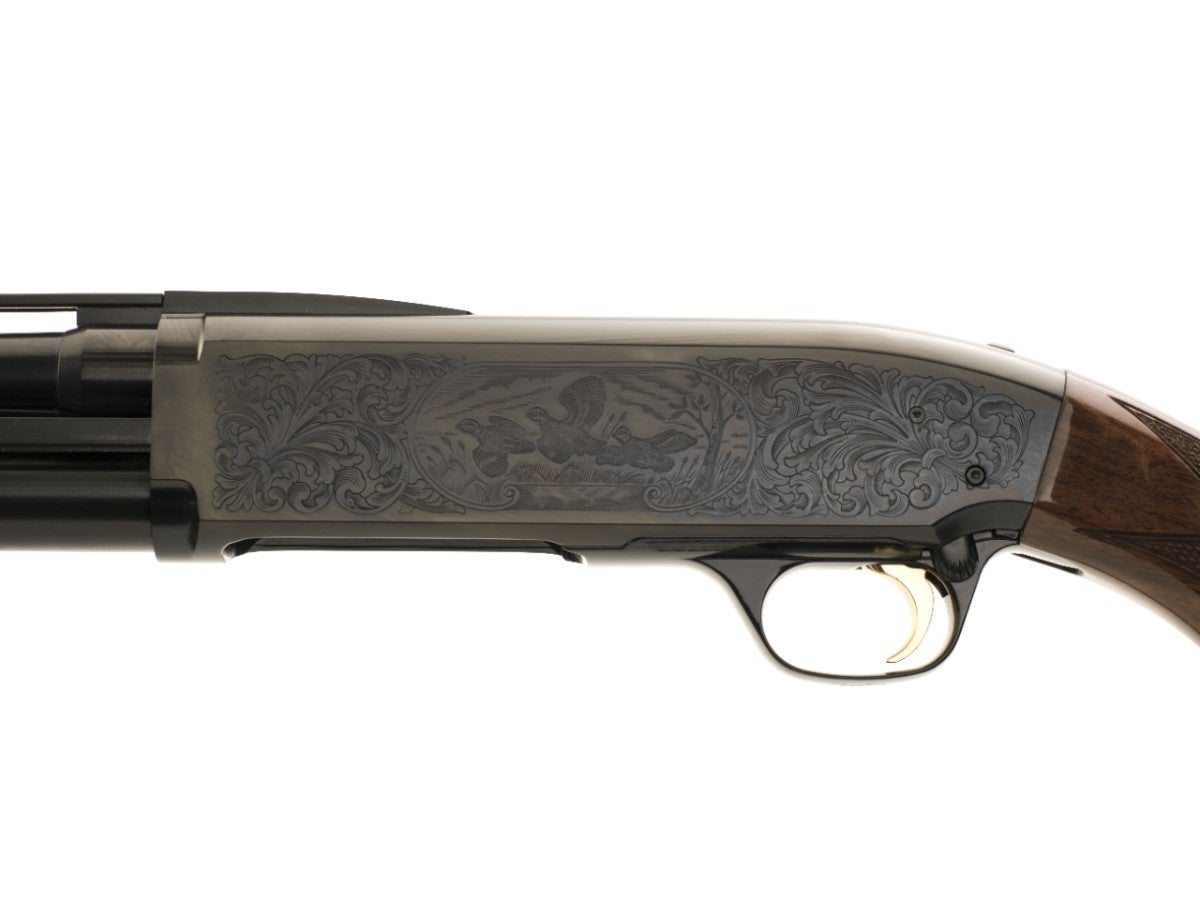 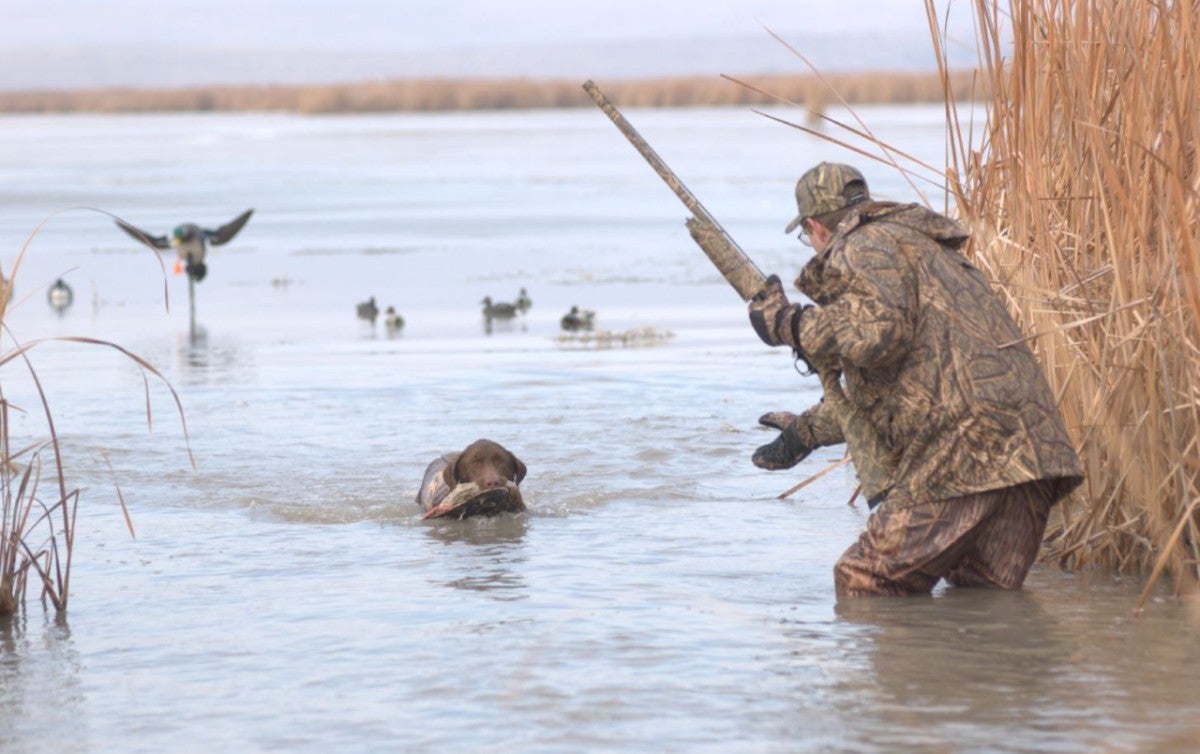 John Browning began experimenting with pump action shotguns early on in his career. With his first rifle created in 1878 is was only 15 years before he developed his first marketable design. With the introduction of the Model 1897 shotgun he had created what would become one of the most popular pump action shotguns of the early 20th century and set the standard for the design and function of the entire pump action industry. Below are photos of his early storefront and workshop in Ogden, Utah. 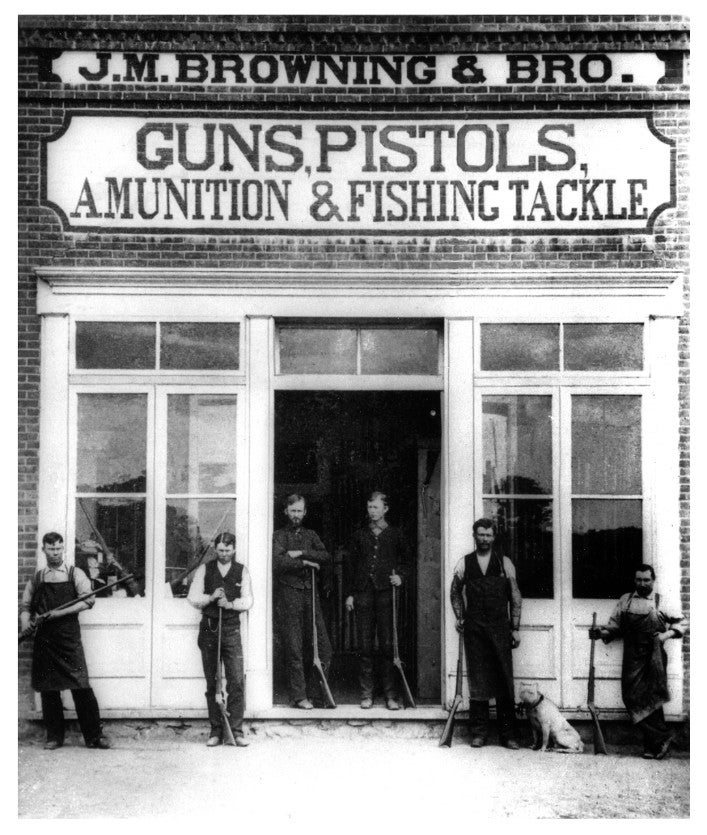 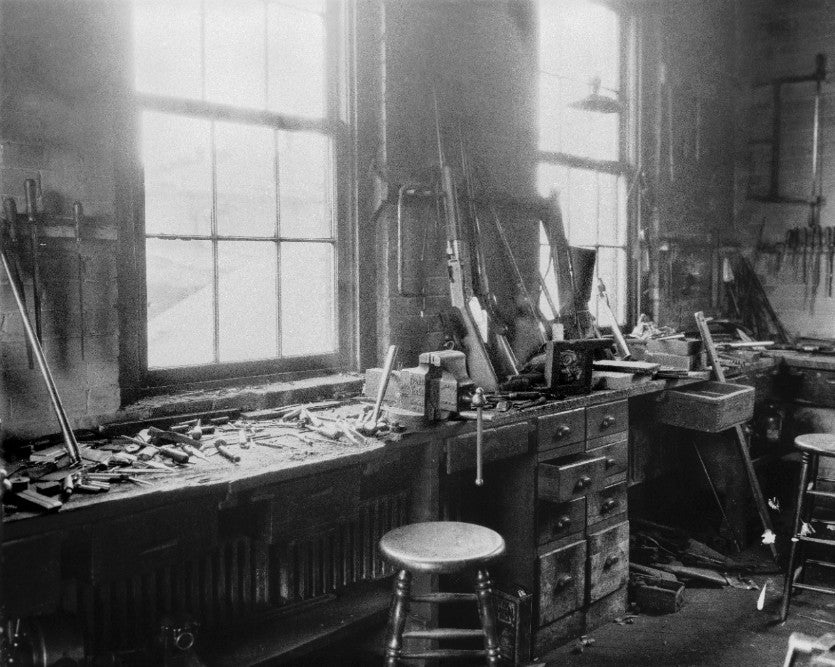