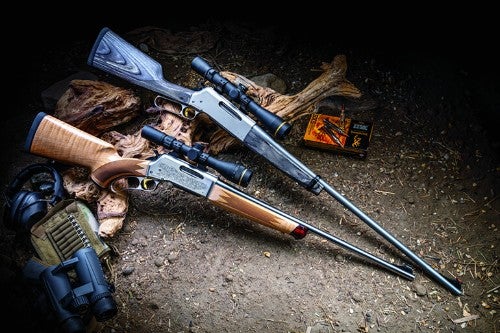 Browning has been at the forefront of lever-action repeating rifle innovation ever since the revered Winchester Model 1886 was brought to life from the drawings of John M. Browning himself. From the aforementioned Model 1886 to the Model 1895 with its innovative box style magazine that allowed the use of pointed bullets, his designs contributed greatly to the refinement of the lever-action rifle.

It was natural that another Browning, John’s son Val, would be a part of the development of the BLR, the next generation of lever-action rifles. It is the history and development of the BLR, and subsequent testing of a pair of new models that Brad Fitzpatrick expounds upon in an article published April 2, 2021 on gunsandammo.com

“For 2021, there are four BLR rifle models offered by Browning.

With past covered, Fitzpatrick shifts to the present, discussing in detail the current BLR offerings from Browning. These include different shaped stocks and stock materials, blued and stainless steel barreled models, takedown versions and high-grade guns. You can see the entire line of BLR rifles here.

“However, I’ve found that the current BLR is a still-capable rifle that stands up well to modern rivals thanks to smart engineering and loads of charm. ”

For review, Fitzpatrick chose a pair of BLR rifles from our current selection. “… I ordered two representative rifles for range work. Don’t be surprised, but one was the limited-production White Gold Medallion Maple rifle that I requested in .243 Win. The other was the BLR Lightweight ’81 Stainless Takedown chambered in .300 Win. Mag.” He continues, “I did mount Leupold® scopes to both guns for this evaluation. Neither scope had large objective lenses, so they fit nicely.”

“…I have become a fan of Browning’s clever lever.”

Fitzpatrick was particularly impressed with the balance of the BLR. "When you pick up any BLR, the first thing you notice is how well-balanced these rifles are. Balance is important to hunters who may use the rifle while hunting in a stand or stalking big game in thick cover. The BLR’s handling offers a balance point at the front of the chamber, which gives the guns a so-called 'between-the-hands' feel." He also noted the light weight and compact dimension that contribute to to the nimble feeling of the BLR. "The White Gold Medallion Maple weighed just 6½ pounds, which makes it as light as the average bolt gun in this same caliber. The gun’s overall length is 40 inches, and up to 45 inches if chambered in a longer cartridge such as the 7mm Rem. Mag. or .300 Win. Mag. These specs make the BLR ideal for hunting from blinds and tree stands."

On the range, Fitzpatrick got down to business on the bench. After firing a variety of loads through the rifles, he walked away satisfied with the accuracy of both of the BLR models he tested. "Though these samples never broke an honest inch, certain loads averaged around 1¼" from 100 yards. The overall average was about 1½ inches. For the type of hunting that the BLR is designed, a handy 1½ MOA rifle is a much more versatile tool than a longer and heavier precision rifle."

To learn more about the history of the Browning BLR and see how the rifles fared at the range, read Brad Fitzpatrick’s review here.

Original article copyright Guns & Ammo 2021. Photos are copyright  by Mark Fingar, Guns & Ammo, Browning and/or used with attribution or permission or are in the public domain. Copyright Browning 2021.